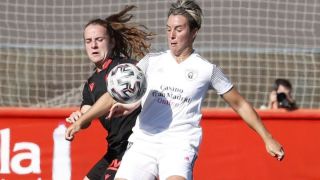 Madrid CFF did not feature in many people’s list of top three contenders at the start of the season, but after four rounds of action they sit in that all-important third position.

It is probably fair to say that their games so far haven’t registered too high on the entertainment scale – only rock-bottom Sporting Huelva and EDF Logroño have as few goals as them but only Barcelona (who are yet to concede) and Atlético (one goal against) can rival their defensive record.

And they have milked those three goals for as much as they are worth. Three 1-0 wins out of four have given them nine points, with the only blemish being that shock 1-0 defeat by Espanyol.

On Saturday it was Real Sociedad’s turn to come up against Madrid’s immovable object. The visitors dominated the first half yet found themselves 1-0 down thanks to Priscila’s goal from a swift counter-attack.

Under Natalia Arroyo, La Real are committed to their passing philosophy but as time ticked away they struggled to find a balance between that and going for broke. When they tried to move the ball around quickly, Madrid stuck to their task, pressing them immediately and cutting down the options for a pass, while many attempts to play a faster ball forward often ended up being over-hit and missing their target. They will undoubtedly come up against more sides who set up like this against them this season and learning to find a way through will be vital if they are to make a serious push for the top three.

Meanwhile Madrid face a tricky midweek trip to Bilbao, but they have several favourable home fixtures coming up and will fancy their chances of extending their good start.

Sporting Huelva have been a fixture in the top flight of Spanish football for the last 15 years, famously winning the Copa de la Reina in 2015 and mostly being a comfortable fixture in mid-table, but following a poor start to the season that status is starting to look at risk.

They were unfortunate in losing to Valencia on the opening weekend before being overwhelmed by Barcelona in their last outing before the international break, but the performance was not too bad in the context of things.

However, this weekend’s 4-0 defeat by Sevilla should really set alarm bells ringing, especially with how easily the home side were able to walk through the defence for a couple of the goals. Another Andalucían derby, at home to Real Betis midweek, could prove to be huge in the context of their season.

Rayo Vallecano’s season got off to a much later start than the other Primera Iberdrola clubs. Issues surrounding the Covid-19 protocol and player availability meant they were unable to start pre-season at the same time as their competitors and as a result they were allowed to opt out of the first two matchdays, their games against Real Sociedad and Sporting Huelva being rescheduled for later in the campaign.

But the shorter pre-season means they are always going to be playing catch-up at this stage and their lack of competitive game time was shown up when they lost to Real Madrid. Having an international break right away probably wasn’t exactly what Rayo would have wanted – robbing them of an opportunity to build up some momentum and when they returned this weekend against UDG Tenerife, after falling behind, they managed to turn the game around, only to concede an equaliser almost straight away and then go on to lose to an injury time penalty.

Things are not going to get much easier for them either, their next game is away to Barcelona…

Barça roll on… with goals from everywhere

The international break clearly did not disrupt Barcelona’s rhythm as the champions returned to action on Saturday lunchtime with a 5-0 win at Real Betis to take their tally to 21 goals in four games.

Their numbers are startling enough but what is truly exceptional is how the goals are being spread around. Eleven different players have found the net for them already this season with midfielders Alexia Putellas and Aitana Bonmati sharing top spot with three each. Another goal for Nigerian forward Asisat Oshoala took her career total with the club to 38 goals in 44 games (29 in 30 in league matches) while last season’s top scorer Jenni Hermoso returned for the first time since the opening game of the campaign and got off the mark with her the season too.