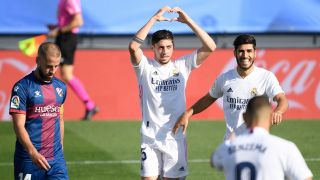 Real Madrid star Eden Hazard scored on his first La Liga start of the 2020/21 season as Zinedine Zidane’s side won 4-1 at home to Huesca.

Los Blancos have struggled with inconsistent results in recent weeks with just one win in their last four games in all competitions.

However a season first for the returning Hazard, alongside a brace from Karim Benzema and a second half strike from Federico Valverde, secured all three points against Francisco Rodriguez’s team.

The visitors were the brighter of the two sides in the opening stages with Rafa Mir and Pedro Mosquera testing Thibaut Courtois.

But Real Madrid’s ruthless edge emerged just before the break as Hazard bulleted home a fantastic strike from 25 yards.

Eden Hazard with a WONDER GOAL! 😱

Just his second Madrid goal, but what a strike that is! 💥 pic.twitter.com/2uxb39jHCs

That quick fire double dented Huesca’s chances of an upset, as Valverde’s emphatic finish from inside the box made it 3-0 on 54 minutes.

The visitors did work hard to remain in the game the closing stages, as David Ferreiro tucked home Mir’s cross for a consolation, before Benzema nodded home a simple second goal on 89 minutes.

Benzema gets his second and Madrid's fourth from Rodrygo's knock down! 🔥