Real Madrid are concerned about the output of Brazilian forward Vinicius Junior in the final third of the pitch, according to a report in Marca.

Now aged 20 and in his third full season in Madrid, there has been a great deal of excitement generated by Vinicius although the report claims that the exit of Cristiano Ronaldo the summer he arrived has intensified the spotlight on his goal output.

Vinicius has clocked up 76 first-team appearances for Los Blancos but has only scored 12 goals in that timeframe, although three of those have come in his seven outings this season – and is now just three away from his highest scoring season in the Spanish capital.

The former Flamengo star has become an increasingly important member of the first-team squad and particularly under Zinedine Zidane, for whom he appeared in 38 games last season of which 17 were starts.

He has started five games this season, partially fuelled by the absence of Eden Hazard and the lack of prominence for the likes of Luka Jovic and Mariano Diaz under Zidane.

Vinicius has often appeared as a second forward to Karim Benzema but questions are now beginning to be asked about his output considering his new role in the team.

It follows on from his Madrid teammate Karim Benzema launching an extraordinary attack against Vinicius in Tuesday night’s Champions League draw at Borussia Monchengladbach, which is currently dominating Real Madrid news.

Benzema told teammate Ferland Mendy, as per Marca: “He (Vinicius) does what he wants. Brother, don’t play with him…oh my God. He is playing against us.”

It must be remembered that Vinicius is still only 20 years old and is continuing to develop, but there is a belief that he is still a raw diamond and his prominence is causing issues for Madrid upfront. 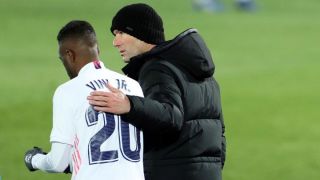