The first coronavirus-enforced behind-closed-doors El Clasico seemed to confirm many truisms about Barcelona and Real Madrid.  Los Blancos secured a 3-1 victory in the Camp Nou, confirming the champions require the motivation that big games bring to perform at their best, and highlighted the multitude of problems at the Blaugrana which boss Ronald Koeman inherited but appears unable to fix.

Both sides came into the match woefully prepared, losing their previous league games without scoring. Clásico games tend to set the tone for the big two’s campaigns for the rest of the season, or at least until they meet again, and the win gives Madrid all the reason in the world to believe they can retain the title for the first time since 2006-2008.

We go through some of the talking points about what the result and the various performances mean for both sides.

Real Madrid – their title to throw away

After an awful week of preparation ahead of this game, Madrid were still able to show up and perform on the biggest stage. However, the last week that Zidane’s men have endured puts their general motivation levels into question. Yes, they can beat Barcelona when pitted against their fiercest rivals and look much the better team in doing so. They were defensively sound, allowing Messi and teammates practically nothing in the second half when trying to mount a comeback.

This was the total opposite of a performance than what was seen last week in La Liga against Cádiz and midweek in the Champions League against a depleted Shakhtar Donetsk. Madrid played host in both encounters, and the visitors on each occasion enjoyed chance after chance against them with Cádiz 0-1 up at the break and Shakhtar 0-3 up.

The newly promoted Andalusians are a side Madrid would expect to swat away without breaking a sweat, while the Ukrainians travelled to Spain missing more than half of their first-team squad due to Covid-19 positives and had to call up a string of youth teamers just to fill out their squad. Neither side looked, on paper, like they had much of a test to offer Madrid, and Zidane’s charges played like they believed the matches were won before they kicked off but were duly beaten in each. However, pitted against their eternal foe, there is no lack of motivation to be found.

Madrid have plenty of recent history showing this short-term motivation. In the back ends of their recent successful Champions League campaigns, their eleven superstars are given the eyes of the world in the biggest club competition in football, with a simple, knockout, win-or-die format that simplifies the objective and focuses the mind.

In only one of those seasons did they manage to win La Liga as well as the European Cup, often because they found themselves practically out of the running domestically by the time March or April would come around. It is as if starting a new 38-game season each summer is too grueling a thought to bear, and too often Madrid have had their scalp claimed by what would be considered lesser sides at early stages of the campaigns.

Following the return to play after the pandemic-enforced break, Madrid’s task was simplified again, in a somewhat comparable manner to a Champions League run. They were given 11 games straight without a break and without the commitments or distraction of any other competition, to just grind wins out, wait for the inevitable Barça slip, and take the crown. Many of those wins at the end of last season were far from spectacular, but Zidane found a way of getting his players to fall in love with winning ugly games 1-0.

Another key difference between those Cádiz and Shakhtar games compared with the Clásico was the involvement of Sergio Ramos. For all of his flaws, marauding forward and sometimes leaving space behind, for all the red cards he’s gotten, for all the questionable penalties won, Ramos has to be considered not only one of the best defenders in the world but legitimately one of the best players in the world. His leadership also helped to fine-tune his side’s focus, which was so evidently missing in their previous outings.

The former Sevilla star won and scored a penalty against the Catalans, putting him on 99 career goals for Madrid – a figure that would be outstanding even for a striker, let alone a center back. He will clearly surpass the 100-goal milestone soon, and deserves the laudits given by France Football readers, who hailed him as the best defender in history.

Another star in Madrid’s backline that deserves a mention from this game will not ever be considered one of the best defenders in history, largely because he’s not even a defender. But Lucas Vázquez’s superbly professional performance is worthy of a lot of praise.

Zidane has a headache at right-back, with Dani Carvajal out with knee ligament damage and Álvaro Odriozola out with a calf injury. As such, Nacho Fernández started the game to the right of the defence but came off injured just before half time with the score level at 1-1. The winger slotted into the defensive unit with comfort and looked reliable and solid.

Barcelona – the crisis has not gone away

Meanwhile, Barça look a very dysfunctional team. The problems existed before Koeman arrived, and the desperate hope was that the Dutchman would be able to solve the issues, or at least paper over them to muster up something of a competitive team this season. He may yet be able to field a side that can compete, but Barcelona still look a long way away from being considered one of Europe’s elite teams.

First and foremost is the squad makeup. It is well documented how Barça have squandered huge sums of money for big stars that they haven’t been able to fit in their team over the last number of years. The mainstay of Barça’s attack over the last three seasons – the Messi-Suarez connection – has been gutted out by the departure of the Uruguayan, and now Lionel Messi cuts a lonely figure on the pitch, playing alongside teammates he doesn’t look like he trusts.

Ansu Fati is an exception, the youngster became the second youngest goalscorer in the history of this fixture with his well taken early strike to level the game on 8 minutes. But beyond the 17-year-old, Coutinho was completely ineffective and offered little to the side beyond being able to receive a pass and give it off again. He does not have the dynamism he showed at Liverpool, he doesn’t carry the ball or create danger, and Koeman still hasn’t found his position on the pitch as the Brazilian popped up in various different roles through the game as the manager tried to shake things up.

Coming off the bench was French World Cup winner Antoine Griezmann. A starter at the beginning of the campaign, he has seemingly lost Koeman’s trust after having been dropped for the last couple of games and offering nothing when he entered the pitch on Saturday. Without a goal this campaign, the forward has missed a couple of chances that a player of his quality should be scoring, such as a clear one-on-one in week 7 against Getafe when played through by Pedri, the 17-year-old newcomer that already looks to have given Barcelona better performances this season than the French star. Griezmann was given ten minutes in the Clásico and touched the ball once.

Further behind, Sergio Busquets looks a shadow of his former self too. For the opening goal, the defensive midfielder seemed to just give up on tracking Fede Valverde as the versatile Madrid midfielder marched into open space to score. From there, Busquets looked lost, totally lacking the positional awareness and masterful interpretation of space that has made him one of the best holding midfielders in the world for the last decade.

As much as Madrid’s preparation for this match was terrible, Barça’s was perhaps worse, with numerous leaks coming out in the Spanish press in the weeks building up to the game about dressing room turmoil and splits. Once again, the players are at war with the directors of the club, this time over voluntary wage reductions to help the club survive this period without fans at matches. Team captains sent a letter to club president Bartomeu and the board rejecting the pay cut, stressing that the players “will not accept the club infringing on our rights,” and accusing the club of acting in a “sultry” manner.

A vote of no confidence is, in theory, taking place over November 1-2 which could see the president and his board ousted from power, but the health situation could yet affect proceedings. As seems to always be the case in FC Barcelona lately, the civil wars, controversy, and tension keep piling up every day.

Friday and Monday night football returned to La Liga; another chapter in the ridiculous back-and-forth between La Liga and the Spanish football federation is written. La Liga want to see games played on Fridays and Mondays, while the federation argue against it. A court ruled in favour of the federation last season, but when play resumed after the coronavirus break, games were scheduled for all seven days of the week. To begin the new season, the federation took umbrage with the convenient forgetting of this court decision and appealed for games to be restricted to Saturdays and Sunday again (excluding midweek rounds of fixtures).

As neither side backed down, La Liga have continued to schedule matches for Fridays and Mondays, only for a court – every single week – to strike them down, meaning players, managers, and fans only found out when their team was playing mere days beforehand. Court appeals will continue going both ways, but this weekend saw Elche defeat regional rivals Valencia 2-1 for the first Friday night game of the season. This column wrote about Elche’s chaotic preparations for this season spelling doom, but now they sit three points ahead of Barça with the same amount of games played.

Happy 100th birthday Osasuna! One of La Liga’s most historic clubs celebrated their centenario with a win against Athletic Bilbao. Before the game, a group of local artists were tasked with composing a new anthem for the club written especially for the occasion, and performed it in the newly renovated El Sadar stadium before kickoff.

Sevilla’s praises have been rightly sung in recent months, as Julen Lopetegui has his team organised into one of the most drilled and exciting teams in Europe right now. However, fatigue may have started to catch up with them, as they have just lost their second consecutive league game after such a long unbeaten run. Their title hopes will be severely hampered with the loss to Eibar.

Lucas Pérez can’t catch a break. Without a goal since scoring three in four games in February, his Deportivo Alavés side have been struggling, but a hugely welcome three points away to likely relegation rivals Valladolid could kick start their season. After winning a penalty, Pérez smashed the ball off the crossbar. Later in the game he would score a fabulous volley chalked off for an offside earlier in the play. Then looking to kill the game off, he beat the keeper with a clever shot only to see Jawad El Tamiq clear the ball off the line.

It’s all happening at the Jose Zorilla now 👀 pic.twitter.com/taMBtyUrmy

Watch Alexander Isak’s beautiful outside-of-the-boot cushioned control to set himself up to score Real Sociedad’s fourth against Huesca. Marvellous. La Real are now the league’s top scorers with 14 in 7 games played and boast the second-best defensive record with only three allowed, just behind Atletico Madrid (1).

Goal of the week: Josan Fernández’s wonderful solo strike to set Elche on their way against Valencia.

Great work as he cut inside and produced a terrific finish 👏 pic.twitter.com/0caHBeI7wn 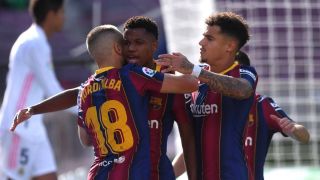