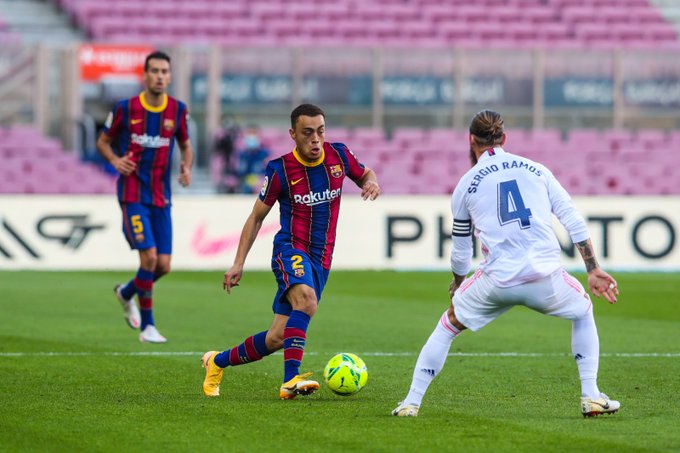 Barcelona defender Sergino Dest admitted he was left frustrated by their 3-1 La Liga defeat in his first ever El Clasico appearance.

The 19-year old created history at the Camp Nou by becoming the first ever United States international to feature in an El Clasico match at the Camp Nou.

However the former Ajax star ended the game on the losing side despite a positive personal performance at right back.

Goals from Federico Valverde, Sergio Ramos and Luka Modric secured a 3-1 win for Zinedine Zidane’s side in Catalonia and Dest confirmed his disappointment at full time.

“El Clasico is a very nice game to play in. It was my first but it’s a shame as we lost out to Real Madrid”, he told a post match interview with Movistar, reported via Diario Sport.

“It was a very tough game. We had chances, and so did they, but they were a little more successful and scored the goals.

“But we have to go on and win the next match. We have another game on Wednesday against Juventus in the Champions League and we have to win that.”

Dest made his first start for Ronald Koeman’s side in last weekend’s La Liga defeat to Getafe and he played a full 90 minutes against Ferencvaros and Los Blancos in the last seven days.

He is expected to remain as Koeman’s first choice right back in 2020/21 following Nelson Semedo’s move to Premier League club Wolves with Sergi Roberto operating as back up.

Sergino Dest only thinking about Barcelona amidst transfer rumours
30 May 2021, 15:44