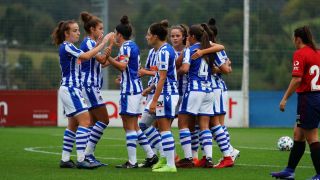 Third place in Primera Iberdrola this season carries much more significance than in the past. From next season, UEFA is expanding the Women’s Champions League into a format comparable to its male counterpart, and this means an extra qualification place for the top leagues.

Last season Levante were the best of the rest in Spain by quite some distance, but it looks like they’ll face stern competition for that spot this season – and Real Sociedad are one of the sides best placed to challenge them.

Copa de la Reina winners the season before last, La Real have that important mixture of youth and experience in their squad to cope with the demands of an extended season.

Saturday’s game was also something of a landmark as it pitted the league’s two up-and-coming female coaches against each other. Levante’s María Pry (35) and La Real’s Natalia Arroyo (34) are the only female bosses in the league this season and as such there will be a lot of attention focused on them, but the performances of both sides definitely augur well for their prospects this season.

The game an end-to-end thriller, with La Real initially taking the lead through Nerea Izagirre before Levante turned the tables, equalising through Irene on 35 minutes before current top scorer Esther fired one her fourth of the season in first half stoppage time.

Two second half substitutions from Arroyo helped turn the game in La Real’s favour. Barbara equalised in the 77th minute and then, just as the game looked to be heading for a draw, her fellow replacement Cecilia Marcos scores what turned out to be the winner.

As we head into the international break Real Sociedad are one of only two sides with a 100 percent record – alongside Barcelona – albeit having played a game fewer. But in defeating last season’s fourth-place Depor and third placed Levante in successive weeks, they’ve put down something of a marker for the season ahead.

Depor have a bad case of the ex

But their sudden rise did come at a cost – with the Galician club becoming a popular resource for clubs looking to strengthen themselves. Goalkeeper Misa and midfielder Teresa Abelleira are now turning out for Real Madrid, Nuria has gone to strengthen Real Sociedad and Maya Yamamoto moved on to Espanyol – and would prove crucial when she came up against her old teammates on Sunday.

Without a win from two tough opening fixtures against the Basque duo of Athletic and Real Sociedad, Depor would have hoped to to break their duck against Espanyol, who finished last season dead last, but this Espanyol is a different animal now, having ended their 525-day wait for a win in Madrid last weekend.

Espanyol took the lead twice, first through Mata’s first goal for the club, then through Cristina Baudet, but each time Depor quickly pegged them back, Athenea and Peke both getting off the mark for the season, but it was left to Maya to have the final say with the winner on 71 minutes.

Depor are left as the only side without a point after playing three games – while Espanyol have already beaten last season’s points total!

Real Madrid off the mark at last

Third time proved to be a charm for Real Madrid on Sunday night as they picked up their first victory in Primera Iberdrola, 3-1 against Rayo Vallecano at Valdebebas.

As the men’s team had done on Saturday, they wore the pink away kit to mark Breast Cancer Awareness day but unlike Zinedine Zidane’s players, they got the result they wanted.

Rayo had sat out the first two weekends of the season and looked a little bit behind on competitive match practice as Madrid dominated the early stages, eventually going in front through Maite Oroz just before the break.

When the action resumed Kosovare Asllani doubled Madrid’s lead, Slađana Bulatović then reduced the arrears before Jessica Martínez rounded things off – all inside four frantic minutes.

Now trying to build some momentum will be key, although their first match back after the international break will be away to Levante – which will likely say a lot about their prospects for this season.

Deyna emerging as a key part of the new Atleti

Venezuelan forward Deyna Castellanos arrived in Madrid at the start of the year with a big reputation. Prolific for her country’s underage sides, she also averaged over a goal a game for Florida State in the US College system.

But she failed to hit the ground running in Madrid, her own adaptation period coinciding with a difficult run for the team and a managerial change before the pandemic forced the suspension of competition.

That break may have proved to be a blessing in disguise for Deyna as now, with the benefit of time to settle in a new country, she has taken on a leading role for Atlético in the opening games of the season. Each one of Atleti’s games has seen her contribute to a goal – scoring the season opener at Espanyol, providing the assist for Merel Van Dongen against Tenerife last week and then on Sunday, scoring the game-clinching second to ensure three points from a potentially awkward fixture in Badajoz.