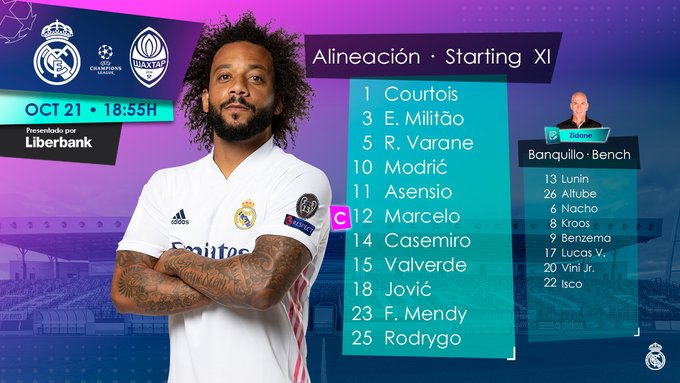 Real Madrid boss Zinedine Zidane has rotated his side for Wednesday evening’s Champions League clash against Shakhtar Donestk ahead of the weekend El Clasico against Barcelona.

Rotations were always likely as we enter a congested period in the fixture scheduling, with star forwards Karim Benzema and Vinicius Junior both starting the game against the Ukrainian champions from the bench.

Sergio Ramos misses the game through injury, with Eder Militao starting the game alongside Raphael Varane in the heart of defence.

Toni Kroos has recovered from injury but will start the game on the bench, with Casemiro, Fede Valverde and Luka Modric forming a midfield trio.

Interestingly, both Marcelo – who captains the side – and Ferland Mendy start the game, with one likely to start at right-back.

Shakhtar won the Ukrainian title against last season and reached the Europa League semi-finals before losing to Inter.