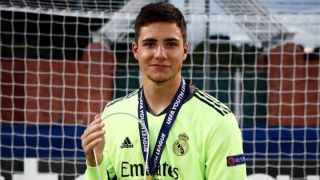 The 18-year-old joined the club’s youth setup six years ago and has risen through the ranks over the years since and will join Thibaut Courtois and Andriy Lunin as goalkeeper selected by Zinedine Zidane for this clash.

In his description on the club’s website, Canizares is described as a goalkeeper who is commanding in the air and someone who is particularly strong in one-on-one situations.

His father, Santiago made 55 appearances for the Madrid first-team but is more famous for his 416 appearances for Valencia over a decade alongside winning 46 caps for the Spanish national team.

Martin Odegaard is the notable exclusion from the 20-man squad to face Cadiz, as per Diario AS.