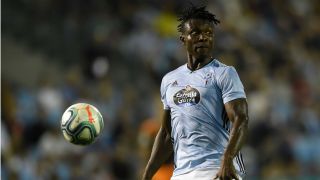 Atletico Madrid’s La Liga trip to Celta Vigo this weekend could be postponed after a confirmed positive Covid-19 test at the Galician club.

Defender Joseph Aidoo tested positive for the virus after returning from international with Ghana earlier this week, with the 25-year now in self-isolation after showing symptoms.

However, after he attended a club training session on Thursday, prior to the positive test, manager Oscar Garcia and his squad will undergo an emergency round of PCR testing.

According to reports from Mundo Deportivo, if any of Aidoo’s teammates or the Celta backroom staff do test positive, the game against Diego Simeone’s side will be called off.

The game is due to kick off at 3pm UK time on October 17, at the Estadio Baladios, with La Liga prepared to authorise an emergency cancellation in line with current Spanish public health guidelines.

Simeone himself has already tested for the virus during Atletico’s preseason trip to Segovia in September.