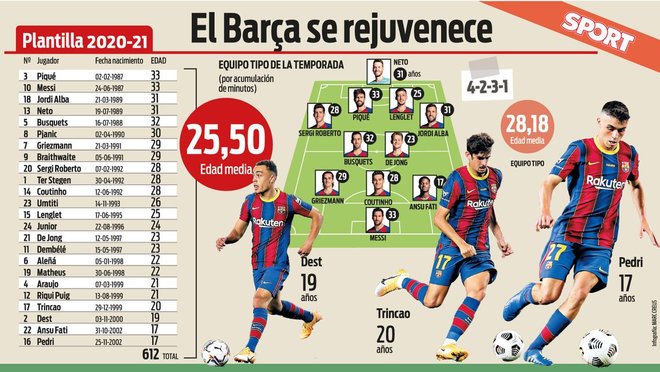 Barcelona have reduced the average age of their first-team squad player by over one year and now have their youngest squad in seven seasons.

The details are outlined in a report from Marca, who outline how the club’s transfer policy this year has seen a huge reduction in wage.

The additions of Pedri (17), Francisco Trincao (20) and Sergino Dest (19) have been pivotal, whilst academy graduates such as Ansu Fati (17), Carles Alena (22) and Riqui Puig (21) are all key, while defender Ronald Araujo (21) has further added to the trend, along with Matheus Fernandes (22).

This has been complemented by departures of multiple players who were in the 30s – Luis Suarez, Ivan Rakitic and Arturo Vidal among them.

The one deal which went against the trend was 30-year-old midfielder Miralem Pjanic replacing Arthur Melo, 23, in a de facto swap deal with Juventus.