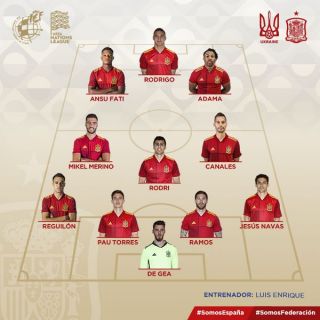 Spain have named their starting XI for tonight’s Nations League clash against Ukraine with the line-up showing 11 different clubs represented.

The most notable aspect of the XI is the inclusion of Wolves winger Adama Traore in an attacking front three alongside Leeds United striker Rodrigo Moreno and Barcelona teen Ansu Fati.

Last week, Marca reported how it was “amazing” to have a player like Traore in their side due to his burst of speed and energy in the final third of the pitch and highlighted how he assisted Spain’s best chance against Portugal in last week’s friendly draw – which Dani Olmo spurned.

Leeds and Wolves are joined by both Manchester clubs – David De Gea and Rodri representing United and City respectively – while Tottenham’s Sergio Reguilon starts at left-back.

Spain have gathered seven points from their opening three Nations League encounters and will be favourites for the encounter in Kiev.