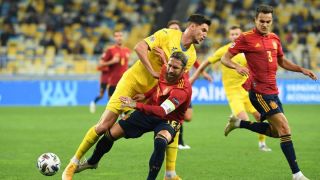 Spain saw their 15-game unbeaten run of matches come to an end with a disappointing 1-0 defeat in Kiev against Ukraine in Tuesday’s Nations League encounter.

Viktor Tsygankov scored the only goal of the game with 14 minutes left on the clock after a direct and lightning quick counter-attack from the hosts, assisted by Andriy Yarmolenko.

Spain goalkeeper David De Gea may have been disappointed with the goal as he was caught far from his line for the goal, which was an excellent touch and powerful finish from Tsygankov.

The result takes Ukraine to within just one point of La Roja at the top of Group 4 in Pot A of the Nations League, with Germany also one point behind Luis Enrique’s side following their 3-3 draw against Switzerland.

Spain had not tasted defeat since their 3-2 defeat in Croatia in the Nations League back in November 2018, and have now just scored one goal in three matches in this international break.