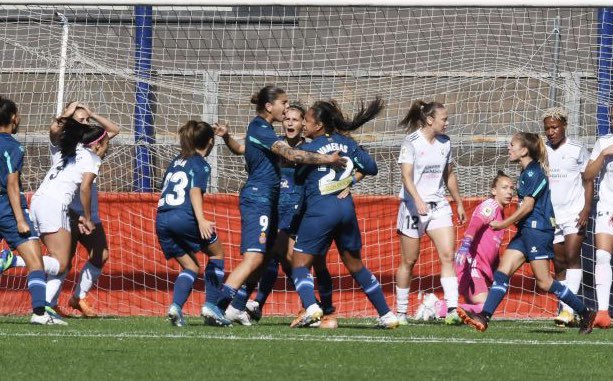 The 2019/20 season was not a good one for anyone associated with Espanyol. The men’s team finished bottom of La Liga, being relegated for the first time since 1993 after qualifying for Europe the year before and hiring and firing three head coaches along the way.

But spare a thought for anyone who decided to watch the women’s team as well. They also finished the season bottom of the table; however, they did not manage to win a single game all season. In fact, you had to go back to 5 May 2019 for the last time they tasted victory.

But on Sunday, 525 days on from their previous triumph, they finally experienced that joy again. Their game at Madrid CFF was not a classic but no one involved will actually care.

Manuela Vanegas gave them the lead, slightly against the run of play, with a powerful header from a corner on 27 minutes and with something to hold on to, they were lifted.

Madrid threw everything they had to try and level the score but found the visitors’ American goalkeeper Kelsey Dossey in excellent form, dealing with every high ball and cross into the box relatively comfortably.

As the minutes ticked down, the Espanyol substitutes in the stand were on their feet, urging their teammates to hold on and greeting every clearance in the manner of a die-hard supporter. When Madrid won a free kick deep into injury time, one buried her head in her hands, unable to watch until she heard the cheer from her teammates which greeted the ball being blocked before the final whistle blew.

Had it not been for the season being suspended due to the pandemic, Espanyol would have certainly been relegated last season. They only picked up five points and were twelve points from safety. But on Sunday’s evidence, they are determined to make the most of their reprieve.

In midweek, Barcelona and EDF Logroño made it to the delayed final of the Copa de la Reina meaning their league meeting took on the extra significance of a form-guide ahead of the showpiece.

And it was over as a contest inside 20 minutes. In fact, it was hard to imagine any other outcome once Lieke Martens had backheeled Barcelona into the lead after five minutes.

Quickfire goals from Caroline Graham and Vicky Losada before the 20-minute mark removed any chance Logroño – fresh from playing 120 minutes against Athletic in midweek – had of turning things around and it turned into a virtual exhibition game for the champions, with Aitana (2) and Alexia making the final score 6-0.

On the day that Barça were belatedly presented with the league trophy for last season’s triumph, they made another compelling case for why it will be hard to prise their fingers off it this time around.

Asllani gets Madrid off the mark

Last weekend, Kosovare Asllani thought she had opened Real Madrid’s goal scoring account for Primera Iberdrola only for the officials to intervene. And controversially so.

After the game, Madrid’s Swedish number nine posted a number of images to her Instagram story which showed Barcelona goalkeeper Sandra Paños holding onto her leg as she tried to get her shot away, showing that the decision should have gone the other way.

Asllani was the first high-profile name to sign up for the Real Madrid project after their takeover of CD Tacón was announced last summer, so it felt appropriate that she would write her name in the history books as the club’s first goalscorer with the opening goal in Sunday’s match at Valencia – a powerful header from the middle of the box.

But their lead did not last long as Valencia were level again within two minutes and for all their efforts, Madrid could not get the second goal to confirm their first win in women’s football. That will have to wait, with Rayo Vallecano next up at Valdebebas next weekend.

Atlético Madrid relinquished their title last season on the back of too many draws in the middle part of the season.

Often these were games that they dominated but failed to kill-off by making their chances count. Saturday was one of those days as they came up against a UD Granadilla Tenerife side with an inspired goalkeeper in Aline Reis.

After spurning an early chance to take the lead when Reis stopped Toni Duggan’s penalty, they eventually went in front when Merel Van Dongen crept in unnoticed at the back post to nod in Deyna Castellanos’ cross.

But just as it looked like they had done enough to secure the win, the visitors won a penalty and Pisco hammered it into the top corner to ensure a share of the spoils.

It is a long season, and they are still bedding in a lot of new players, but Atlético cannot afford to let games slip away from them like this if they are to seriously challenge Barcelona for the title.

Athletic bounce back from semi-final disappointment

Athletic Club travelled to Sevilla with both sides looking to bounce back from cup semi-final disappointment during the week. While Sevilla’s heavy defeat at the hands of Barcelona was expected in many quarters, Athletic were strong favourites to overcome Logroño and match the achievement of their men’s side in reaching the final. Missing out – and doing so in a penalty shootout – is bound to have hurt.

But they bounced back in fine style in Seville to ensure they shared the week two lead with the reigning champions.

Star of the show was Lucía García who netted twice, a fine volleyed finish after five minutes and then beating the offside trap to slot the ball under Sevilla goalkeeper Noelia Ramos after 38.