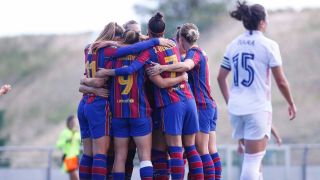 The very fact the country’s biggest sports paper gave its cover over to a women’s football match is newsworthy enough – it was the only one of the four main dailies to do so – even if the headline was a little off-target.

The long-awaited arrival of Real Madrid in Primer Iberdrola may eventually create a rivalry equal to that which their men’s team enjoys with Barcelona, but on the evidence of this first outing they have a long way to go.

Barça swept all before them domestically last season and on this evidence will be hard to stop again as they won comfortably, yet still gave the impression they had several gears to go up yet.

Leading 1-0 at the break through Patri’s deflected strike, the reigning champions really pushed home their advantage in the second half, adding three further goals through an own goal, Lieke Martens and Alexia.

The depth of Barcelona’s bench is one advantage they have over most of their domestic rivals. It was a surprise when Dutch star Lieke Martens, winner of FIFA’s ‘The Best’ award in 2017, did not start, but she only needed eleven minutes to make her mark after coming off the bench. Similarly, Asisat Oshoala, scorer of 20 goals in 19 outings last season, would walk into most starting XIs in the league but here she was limited to a 20-minute cameo.

For Real Madrid, such a defeat on the opening weekend of the season is bound to have a demoralising effect but there are positives to be taken from their first half showing.

Misa Rodriguez, signed from Deportivo over the summer to be their new number 1, helped keep them in the game with some excellent saves in the first half and in truth was unlucky with the first two goals, the second of which would go down as an own goal by her.

Kosovare Asllani led the line well in the first half and was at the centre of most of her team’s positive moves. She thought she had made history by scoring Real Madrid’s first ever goal – which would have levelled the scores at 1-1 – only for it to be ruled out for a previous foul, a decision that seemed harsh at the time.

Overall, their season is not going to be affected too much by their meetings with Barcelona. Third place, and the Champions League place it will bring, must be a realistic target for them and the next few weeks, as their new players gel together will tell us a lot more about this team than this result.

Elsewhere this weekend, Atlético Madrid got their season off to a winning start with a 2-0 win at last season’s bottom club Espanyol. Levante came from behind to win 2-1 at Logroño, and Athletic defeated Deportivo 2-1.

In Sunday’s games, Valencia won at Sporting Huelva with a late penalty, Eibar marked their return to the top-flight with a 1-0 win over Betis and Madrid CF won 1-0 in Tenerife. Sevilla and Santa Teresa shared the points with a 1-1 draw.