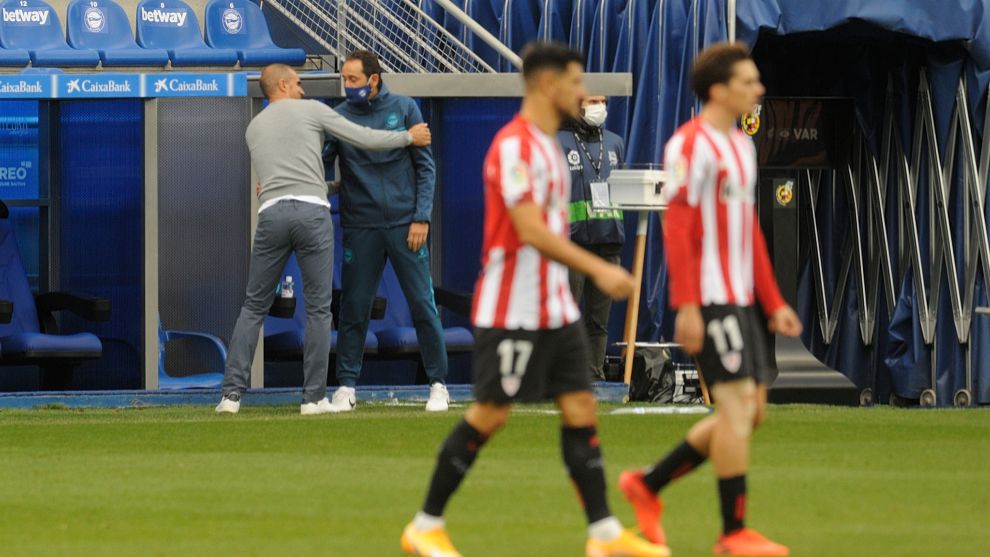 Athletic Club Bilbao are in big trouble. Their star striker has not scored a goal in over 1,000 minutes of football, their last ten outings have yielded seven defeats – including one to a newly-promoted side that played a significant portion of the match with only nine players. Athletic now sit in the relegation zone with just three points to their name this season after a derby defeat to Deportivo Alavés, who themselves have struggled badly during the early stages of this season. A crisis is looming in the Basque Country.

Alaves take the lead in their Basque derby with Athletic Club! 🔵⚪

Rodrigo Ely claims the goal after a great delivery by Lucas Perez 👏 pic.twitter.com/n6rKQwhPgk

Los Leones have one of the proudest heritages of any club in world football, relying only on players from the Basque country or who had their footballing education there. It is a policy that has served them exceptionally well through history – along with Real Madrid and Barcelona, they are the only other side in Spanish football never to be relegated out of the top-flight.

The question of abandoning this principle very briefly arose the last time the club found themselves in similar danger, back in 2018/19, and at the time with presidential elections coming up, the general consensus among fans was that relegation was the preferred option over abandoning the Basque-only policy.

That crisis ended with then-boss Eduardo Berizzo being sacked and replaced by the man still in charge today, Gaizka Garitano, who was promoted from the B team (Bilbao Athletic) and the team fired up the table; eventually finishing 8th, missing out on qualifying for Europe on the last day of the campaign. However, the red-and-whites are a very patient club with managers, and the mood from Bilbao this time round is that they are not contemplating sacking Garitano, who still has the vast majority of this season to reverse fortunes.

To do that, he has got quite the task ahead of him. His team have looked lacklustre and void of ideas in their games this season. The Alavés defeat followed up a dismal home loss to Cádiz, who played almost the entire second half outnumbered, and around 20 minutes with just nine men after their second red card of the game. Athletic’s season opener saw a drab loss to Granada, who also beat them on the last day of last season to overtake the Basques for the last European spot.

The losses against Cádiz and Alavés followed very similar patterns, with a lot of possession and territory in the first halves while lacking conviction to create chances. Athletic came out in the second halves with seemingly lower energy levels, allowing opponents to find their way back into the games and grow in confidence. The introduction of Lucas Pérez for Alavés emboldened the team and made them believe they could go on to win.

Iñaki Williams, who the club have invested heavily in and is one of their most important players, has failed to hit the high ceiling he has shown himself capable of in the past. An extremely talented player, the speedy forward has lacked a killer edge in recent times and has looked relatively easy for defenders to deal with.

Despite being the focal point of the Athletic attack, Williams has not scored since the last game before the Covid-19 enforced break last season, a 1-4 win away to Valladolid. Since then, 15 games have passed without their main hitman finding the net.

Clearly, there is a crisis of confidence at Athletic. “For confidence, there’s no better medicine than results. Win games. That grows your confidence,” manager Garitano lamented after the Alavés game. “The work undermines you a lot if you don’t score. We lack that little bit of confidence.”

All in all, the squad looks in need of refreshing and the arrival of Álex Berenguer is hoped to solve some of those issues and provide the necessary width to the team. The Pamplona-born winger joined Los Leones from Torino, where he scored eight goals in 72 games played in Serie A.

The admirable transfer policy limits their recruitment possibilities, but at the same time provides an imperative to promote youth, which has been elemental to Athletic’s success through their history.

This season, Jon Morcillo, Oier Zarraga, and Unai Vencedor are there young players coming through. In an interview with local press during pre-season, captain Iker Muniain said he was “surprised” at the high level of quality of the youngsters arriving from the youth team, Bilbao Athletic, and he highlighted Morcillo’s speed, Zarraga’s defensive workrate, and Vencedor’s positioning. Oihan Sancet broke through last year and looks to be trusted with even more minutes this season.

Where optimism could lie for Athletic is the fact that they are historically strong at bringing youth products through. Young players like the above mentioned, eager to perform and impress in La Liga, could be guided by a manager who has before brought Athletic out of crisis and moulded into a good team.

“I am convinced that we’re going to change the dynamic,” the manager said after the most recent loss. “I know what football is and the difficulties that there are. We want to work to change the situation. We have not started well, but there will be no lack of hard work on our side to try to improve what we have to improve.”

Although they are still looking for their first win of the season, Huesca are looking like a much stronger side than what their lowly position would suggest. They have made themselves hard to beat, as Atletico Madrid and Villarreal can attest to, while also setting up in an attacking formation and look to take opponents on, as Valencia and Elche saw when Míchel’s side totally outplayed them. Ultimately, all four of those games ended in stalemates, but all of those sides would have expected or hoped to beat Huesca if they were planning on having successful campaigns. But how Juan Carlos or Mikel Rico did not put them 1-0 up over the weekend against Elche will be the cause of nightmares for manager Míchel until they do pick up their first three points.

The last time Sevilla came away from the Camp Nou with anything to show for their journey was almost a full decade ago, a goalless draw in 2011. Even at home, their record against Barça is not much better. This 1-1 draw at the home of the Catalan giants was worth more than just the point on the league table, as Sevilla were excellent and can feel very confident about their prospects for this season on the back of the result. Their relentless pressing caused Ronald Koeman’s side a lot of problems, and in a year where the expected title challengers do not look to have vintage sides, Sevilla have to be considered dark horses for the title.

Sevilla take an early lead and then Barca respond immediately! 🔥

Coutinho gets the equaliser, and we’ve already got a great game at the Camp Nou 😍 pic.twitter.com/So5AxtIws9

Staying in the Andalucían capital, Real Betis go from strength to strength. Mauricio Pellegrini’s men now sit second in the table after brushing Valencia aside, helped with some incredible performances from Sergio Canales, whose scooping control set himself up to strike the first goal of the game, and a 39-year-old Joaquín that is somehow incredibly still playing football at a level very near his peak.

Brilliant intricate passing in the box leads to a Betis opener! 🟢⚪

Sergio Canales’ shot was helped by a deflection, but it was still a really nice team move all around 👏 pic.twitter.com/P910bafyzW

Five games in the last two match weeks of La Liga have seen red cards. In four of them, the teams playing with fewer players ended up winning the match.

Goal of the week: Facundo Roncaglia’s thumping strike from distance to set Osasuna up for an important 2-0 victory over Celta Vigo.

“It is a ROCKET from Roncaglia!” 🚀

What an incredible goal to give Osasuna the lead 😱 pic.twitter.com/K2A9TM7d2q