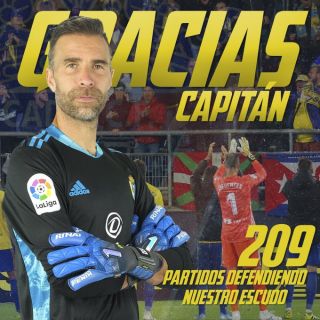 La Liga’s oldest player has retired from football after making his Primera debut last month at the age of 41.

Newly-promoted Cadiz have confirmed their goalkeeper and club captain Alberto Cifuentes has hung up his gloves following a professional career which spanned 22 years.

Cifuentes spent the final five years of his career at the Andalusian club, helping them to achieve promotions from Segunda B and the Segunda respectively, as they returned to La Liga for the first time since 2006 earlier this year.

Cifuentes was a regular for Cadiz across his stint at the club and made over 200 appearances, including winning the Ricardo Zamora Trophy for the Segunda in the 2017–18 campaign due to his defensive record.

He made his La Liga debut last month and kept a clean sheet in his side’s two-goal victory at Huesca.

He started his career at Albacete before going on to represent the likes of Real Mallorca, Rayo Vallecano, Salamanca, Real Murcia and Polish club Piast Gliwice.

His retirement now means that Elche forward Nino is the oldest player in La Liga, aged 40, with Real Betis captain Joaquin, 39, now up to second.