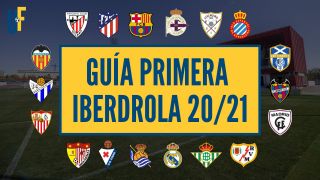 For women’s football in Spain, the coming season will be a hugely important one in shaping the future direction of the sport.

The Spanish government has announced their intention to help make the Primera Iberdrola into one of the best leagues in Europe by making it fully professional from next season, something which will certainly help clubs who have lost players to the pull of clubs in France, Germany and more recently, England.

It did not help the league’s image much that the scheduled start date of September 5 came and went without fixtures being announced. October 3 was eventually agreed upon, with many players taking to social media to voice their displeasure at how their League was being treated. This follows on from last November’s strike which saw a round of matches postponed as players demanded a right to a minimum wage as well as greater protection in event of injuries or maternity leave.

On the pitch, the stakes are higher than ever before with Champions League qualification on offer for the top three teams, but as the expansion of the league is only a temporary measure, the bottom four will be relegated.

Another major factor will be the long-overdue top-flight debut of Real Madrid. Their lack of a women’s team was long a topic of controversy in Spain and even the manner in which they finally got involved – by buying CD Tacón following their promotion in 2019 rather than starting from the bottom themselves – has attracted criticism. But no one can deny that finally having the country’s biggest club involved will be a good thing for the growth of women’s football.

While many expected Madrid to go on a spending spree to attract some of the biggest stars of the women’s game to the capital, their signings this summer have mostly been players who have already proved their worth in Primera Iberdrola.

As Tacón, they finished a reasonably creditable 10th last season, but playing under the Real Madrid banner brings a different level of expectation. They will certainly hope to at least be in the running for the third Champions League place and not to suffer a repeat of last season’s heavy defeats at the hand of Barcelona.

Speaking of the Catalan side, they were crowned champions last season, ending a drought of five years without a title and no one could really argue that they did not deserve it.

Unbeaten domestically, they were nine points clear of Atlético when the season stopped and had already claimed the Super Copa with a 10-1 demolition of Real Sociedad in the final. Jenni Hermoso earned the Pichichi with 23 goals and goalkeeper Sandra Paños won the Zamora trophy, only conceding five goals.

They will start the season as strong favourites to retain their crown, especially with Dutch star Lieke Martens back at her best after an injury-disrupted season last time out.

Atleti, dethroned last season after three consecutive years as champions, will again be the side best-placed to challenge Barça. Last season brought decidedly mixed fortunes, they reached the Champions League quarter-finals, knocking out Man City along the way, but inconsistent domestic form led to a mid-season management change.

They have invested heavily in new signings from abroad this summer, including England’s Jade Moore from Orlando to link up with her international teammate Toni Duggan. Losing Spain number one Lola Gallardo to Lyon is a blow, but Sweden’s Hedvig Lindahl showed in the Champions League that she will be a more than adequate replacement.

Below the top two, Levante were clearly the best of the rest last season and will be focused on earning the third Champions League spot that will come with it this season. But their squad has been weakened with several departures to Real Madrid and Real Sociedad and Spanish international Ona Batlle moving to Man Utd.

Newly-promoted Deportivo were the revelation of last season, finishing fourth in what was only their fourth season of competition. 14 goals from top scorer Peke helped earn her a first international call at the age of 28, while the addition of Colombian star Lady Andrade from AC Milan is an eye-catching one.

Also in the mix for the third European place will be the two Basque sides, Athletic Club – champions in 2015/16 – and Real Sociedad, Copa de la Reina winners in 2019. La Real are many people’s dark horses this season, with a new coach in Natalia Arroyo (one of only two female coaches in the league along with Levante’s María Pry) a number of exciting signings and a new deal for top scorer Nahikari García.

At the bottom, Espanyol endured a miserable season, only picking up five points all campaign, but unlike their male counterparts, were saved from relegation by the change in format. They’re tipped to struggle again along with newly-promoted Eibar and Santa Teresa. Sevilla, Betis and Valencia also flirted with relegation last season and will be looking to avoid doing so again, as will two of the league’s independent teams, Sporting Huelva, Copa de la Reina winners in 2015, and Madrid CF.