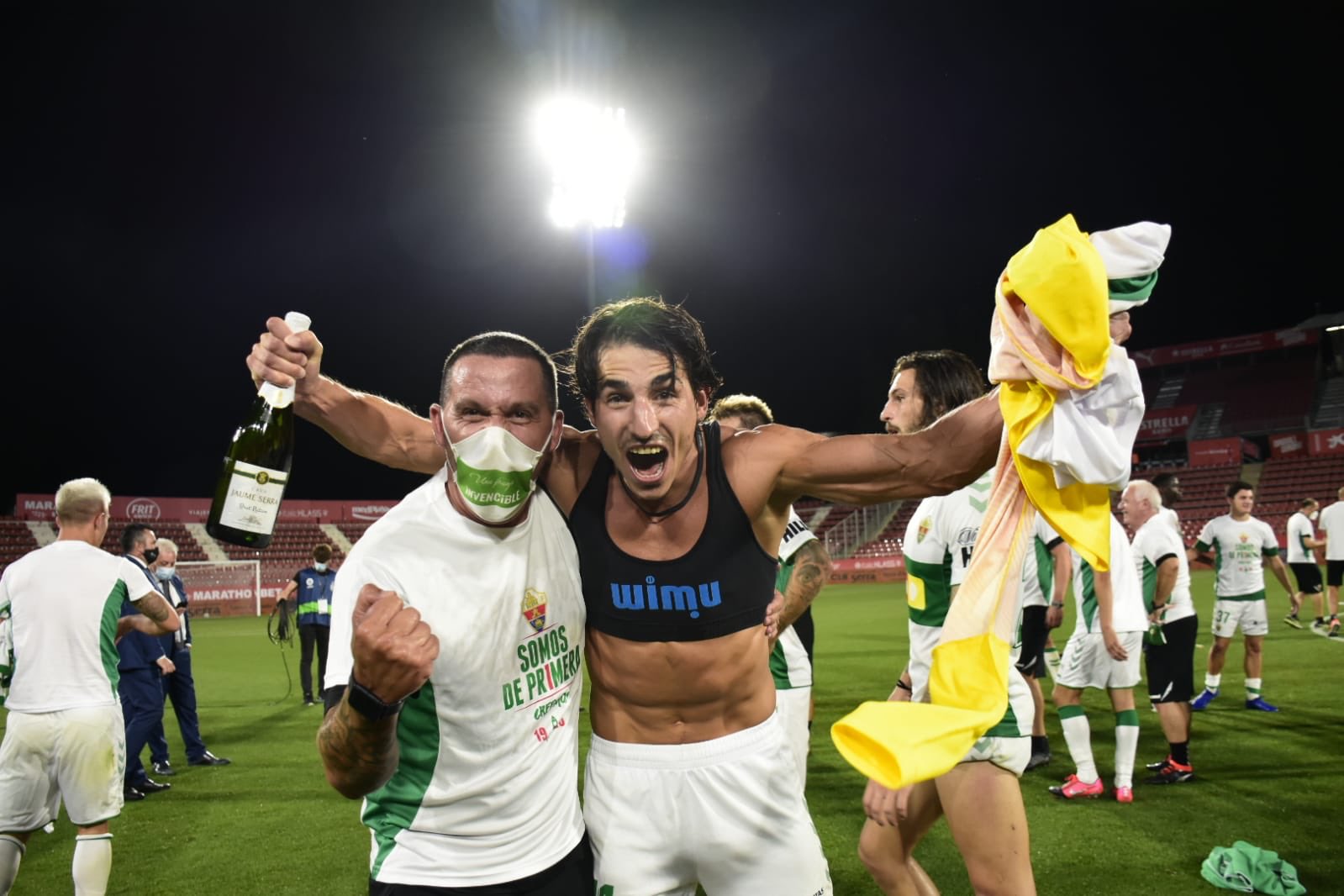 Living in chaos, with just 12 professionals in the squad at the beginning of pre-season, historic financial issues and one of the lowest budgets of last season’s second division, a stunning late promotion playoff win, sacking their double-promotion winning manager and hiring a replacement that’s never worked in Europe before and didn’t have the appropriate licenses to manage in Spain’s top flight, Elche are back spinning their guns and ready to try their luck in La Liga again.

The club from Alicante are back in the top division for the first time since 2015, when they were relegated despite finishing in 13th, and have since grown their squad up to 20 first team players, with new and unfamiliar faces making up much of the starting lineup this year.

Back in the more lucrative top division, they’re building a squad on €45m, nine times as much as last year’s €5m, a figure that only surpassed the budgets of the four clubs promoted into the Segunda for that campaign.

This is going to be a rocky year for els ilicitans, but if the last few years have shown anything, it is that Elche are used to surviving in disorder. Last season only ended for them on August 23 – meaning that up until that date, they didn’t know which division they would be in this year and couldn’t be sure how to plan their squad or finances.

This dramatic uncertainty has led to a strange situation where barely more than a week before their season began, in Gameweek 3, they were a La Liga club that only had 12 professional players on their books – one of whom, Nino, is a 40-year-old striker that led the line last year and made his top flight debut after coming on from the bench in their opener against Real Sociedad. The coronavirus pandemic has affected their planning for the new campaign probably more than most.

Following their promotion playoff victory against Girona, Elche fired their manager who had guided them from the third tier to the first and replaced him with Jorge Almirón, a man who has never played or managed in Europe, and who wasn’t able to officially take charge of their La Liga opener against Real Sociedad due to not yet possession the appropriate managerial licenses.

In fact, he was on the cusp of taking over at Las Palmas and Celta Vigo in the last few years, only to be denied the move by league authorities on the grounds of not possessing the right qualifications. He has since been granted permission to officially take charge, though.

Elche went into that first game with 17 players signed up for the new season, and some new arrivals, like Jeison Lucumí and Lucas Boyé had not taken part in pre-season training at all by that stage. The most expensive signing in the club’s history, winger Raúl Guti, who arrived for a reported €5m, has only trained with the team in the last week, as well as other new signings Luismi and Miguel Cifuentes, who had to be taken off after half an hour against Real Sociedad due to a muscle injury. Youth team players will fill out their bench at least while the first team squad is still being assembled.

All in all, Elche looked as much in disarray as their preparations promised. Many of the teammates literally did not yet know each other, and it showed, as the team lacked cohesion and connection, and were duly sunk 0-3 by the side from San Sebastián.

In their second outing they travelled to Eibar, an almost universally adored club from a tiny town in the Basque countryside, holding their own against some of the world’s best teams. However, it is very plausible to think that Eibar may not have remained a La Liga club today if not for the financial mismanagement in Elche.

In 2014/15, the green-and-whites finished in 13th, but were relegated for tax debts owed to the state, and Eibar, in their fairytale debut season in the top flight, were saved from relegation despite finishing 18th in the table.

Since then, Eibar have gone on to consolidate their place among Spain’s elite, and have stayed in the division since, defying normal expectations of a town with a total population that could almost fit four times over in the Camp Nou.

In Ipurua, Elche got a small slice of revenge for the historical difference in fortunes, with a 0-1 win to pick up their first points of the season. The goal came from new signing Lucas Boyé, a 24-year-old Argentine forward verging on journeyman who has not had a fruitful career in Europe so far, bouncing between clubs in four different countries already since arriving from River Plate to Torino.

“I want to redeem myself. I see myself as a goalscorer,” he stated in his presentation as an ilicitano player, as per Marca. His fine spin to create space to unleash a shot that may have caught the Eibar keeper by surprise was reminiscent of the great Johan Cruyff, and was certainly a good way to begin his redemption arc if Elche are to have success this season.

The team from Spain’s southeast corner have had one of the most patched-up preparations for life in the top-flight that any side has had to endure. But come what may, els frangiverds are accustomed to promotions, relegations, rolling the dice and gambling for glory.

The sky’s the limit for Ansu Fati. After three goals in two games, and impressive, dominant, and difference-making displays, the 17-year-old may be able to lay claim to being the player of the season so far in these very early match weeks.

Ansu Fati is a superstar! ⭐

Just 17 years old, but he’s on the scoresheet yet again for Barca 🙌

3 goals (and counting) in 2 games to start the new LaLiga season 🔥 pic.twitter.com/vUpYcUIByy

He shone against Celta Vigo, particularly in the first half, with a magnificent control to completely change the trajectory of the play to score the opening goal. He danced around Denis Suarez, raced past Aidoo forcing the defender to haul him down, and provided Messi with a good opportunity to score with a visionary pass through the legs of Hugo Mallo, only for the captain to barely miss contact with the ball. A mature performance, added to his masterful show in the opening game against Villarreal, Fati has been one of the brightest and most decisive players of the season thus far.

As for Lionel Messi, he tried it against Celta again and has been trying it for some months now, and it’s surely only a matter of time before he pulls it off – but expect to see the Argentine wizard score directly from a corner kick at some point in the future.

Paco Alcácer put on a show of deft, nimble touches in Villarreal’s 3-1 win over Deportivo Alavés. The forward has started the season brightly, with three goals to his name already. He netted Villarreal’s first and third on Wednesday night, and showed his mastery at the art of the subtle touch in both. Arriving early ahead of the defenders for the first goal, it was like Alcácer knew Gaspar’s run would lead almost to the byline after Dani Parejo’s pass from deep completely opened the pitch up. He met the right back’s low cross with a neat flick to guide the ball into the far corner.

The ex Barça and Valencia man then put the result beyond the Basques after latching onto Gerard Moreno’s looping effort that bounced off the post. With very little time to react, he killed the ball’s movement with his though before anticipating the onrushing goalkeeper’s leap to block a shot, and rather than take the obvious choice and shoot on sight from a yard out, Alcácer had the calmness to neatly flick the ball over the diving keeper, opening the pathway for him to execute. An overall polished display of marksmanship.

Two away games for Cádiz in Primera now have yielded the maximum six points. Their defensive and counter-attacking setup has them well positioned to soak up pressure and pick up points away, but to do so at Athletic Bilbao, playing with just nine players for over 20 minutes and being outnumbered for almost the entirety of the second half, is beyond what was expected of them.

Last minute winning goals in both of Sevilla’s games so far has them riding a wave of confidence. Always willing to fight until the very end, the Europa League champions have shown a spirit that few other teams in world football could match right now, with late victories and comeback wins defining their last few months.

Goal of the week: Marc Cucurella’s thumping strike with his weaker right foot to double Getafe’s lead over Real Betis.

Marc Cucurella with an absolute ROCKET! 🚀

A simply outstanding goal to double the Getafe lead, and with his weaker foot 😱 pic.twitter.com/djBn60a5BZ