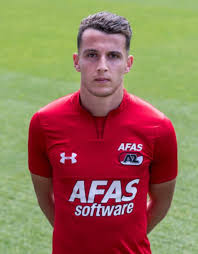 Sevilla are considering a last minute transfer swoop for AZ Alkmaar winger Oussama Idrissi as part of a €12m deal.

Julen Lopetegui’s side have been busy during the summer transfer window, but a move for Moroccan international Idrissi would be their second biggest transfer in 2020.

According to reports from Marca, Lopetegui has highlighted the 24-year old as potential option for the season ahead.

Idrissi joined AZ Alkmaar from FC Groningen in 2018 in a €2.5m deal in 2017, before going on to play a key role under both John van dem Brum and Arne Slot in the last three seasons.

He netted 13 league goals in 25 league games last season, as the 2019-20 Eredivisie season was eventually cancelled due to the ongoing Covid-19 pandemic.

Lopetegui has already boosted his attacking options in recent months with the signing of AC Milan star Suso, following an loan spell at the Estadio Ramon Sanchez Pizjuan in 2019-20, and Real Madrid winger Oscar Rodriguez.