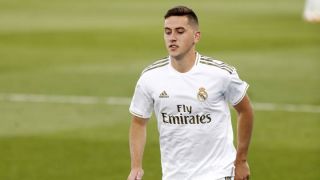 Real Madrid defender Javi Hernandez is reportedly in line to complete a move to Segunda Division side Leganes in the coming days.

The 22-year old joined Zinedine Zidane’s side from Sevilla’s youth ranks in 2013, before going on to play a key role at the club’s underage and reserve teams.

He joined Real Oviedo on loan for the 2018-19 season, before returning to the Spanish capital ahead of the 2019-20 campaign.

However, with his first team opportunities significantly limited at Zinedine Zidane’s side, he is now set to move on from the La Liga champions, in search of regular football.

According to reports from Marca, he is set to put pen to paper on a four-year deal at the Estadio Butarque.

Leganes boss Jose Luis Marti has already dipped into the summer transfer market, following their relegation back down to the second tier, with Osasuna star Luis Perea already arriving on a permanent deal.