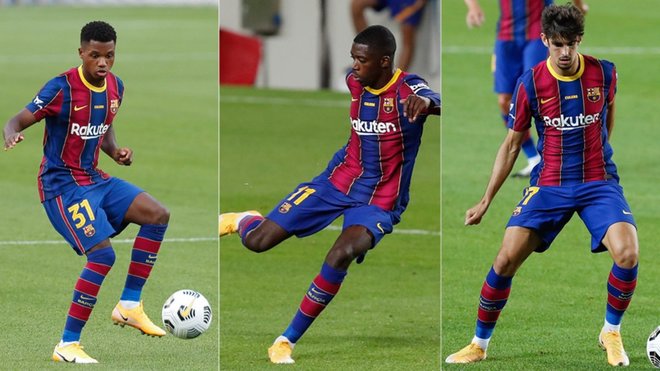 Ansu Fati, Ousmane Dembele and Francisco Trincao are all competing to earn the final spot in the new-look Barcelona attack for their La Liga opener against Villarreal this weekend.

The details are outlined by a report in Diario Sport, who say that one of the three will be selected along with Lionel Messi, Antoine Griezmann and Philippe Coutinho.

Martin Braithwaite is said to be the one remaining forward at the club who is not likely to earn a starting place in the side while Luis Suarez has left.

New boss Ronald Koeman is set to deploy a 4-2-3-1 formation for the Blaugrana, as opposed to the 4-3-3 formation that has been favoured in recent years.

That means a radical change of the shape of the attack, with Messi likely to operate behind Griezmann with Coutinho and one other operation from a wider area in an advanced position.

The midfield two will be formed by two of Frenkie de Jong, Sergio Busquets and Miralem Pjanic following the exits of trio Arthur Melo, Arturo Vidal and Ivan Rakitic this summer.