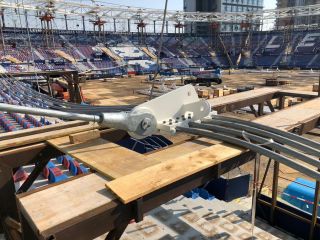 Levante will host Real Madrid in Villarreal’s Ceramica Stadium next month due to ongoing renovation work at their Estadi Ciutat de València ground.

The game is due to be Madrid’s fourth league outing of the campaign but the ongoing ground work at Levante means that it will need to be staged at nearby Villarreal, which is 140km away.

As per Marca, the club’s request was granted on Wednesday by the relevant authorities and Levante are hopeful their home will be ready for their next scheduled home match – against Celta Vigo later in October.

Four of Levante’s opening five matches are away from home, and it had been hoped their stadium would be ready to welcome Madrid.

Work began on the stadium upgrade in April when it became clear that matches for the foreseeable future would be played behind closed doors.

The renovation work will see an increased capacity and modernised facilities at the stadium.