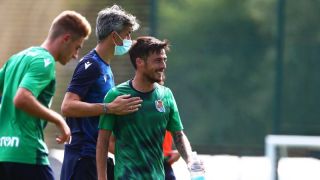 David Silva has trained with his new Real Sociedad teammates for the first time after successfully recovering from Covid-19.

The former Spain international was presented in the club’s Anoeta stadium a fortnight ago having completed his move from Manchester City as a free agent earlier this month.

However, later that day – and before he had met his teammates – Silva tested positive for Covid-19 and had to enter a two-week period of quarantine to recover, which has now expired.

Marca outline how he was in training for the Basque club today and he is likely to be available to debut against Real Madrid this weekend.