Rennes star Eduardo Camavinga has reiterated he is happy about his decision to stay at the club this summer despite interest from others, with Real Madrid strongly linked to the France international.

Camavinga, 17, has caught the eye with his performances in Ligue 1 and he was involved in all 25 – starting 24 – league matches for his club last season, helping them to Champions League qualification.

The central midfielder then became the youngest France international in over 100 years when he made his debut for Les Bleus earlier this month in the Nations League.

Despite a great deal of speculation over his future – with Madrid and Paris Saint-Germain strongly linked – it now appears that the central midfielder will stay at Rennes for at least another season.

“It is clear that it is a compliment that a great club is interested in me, but I am not worried about that,” Camavinga told Telefoot, in quotes carried by Marca.

“I have made this decision to stay at Rennes together with my family and we are happy to have done so, it has been decided. Now what I need is to think about football and not look at everything else. Life is very beautiful right now.

“Did Kylian talk to me about PSG? No, we talk a bit about everything.”

Born in Cabinda, Angola, Camavinga holds Congolese citizenship through his parents. He has lived in France since his second birthday. 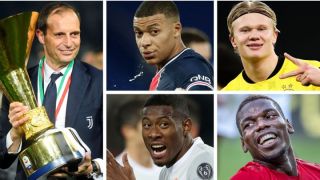