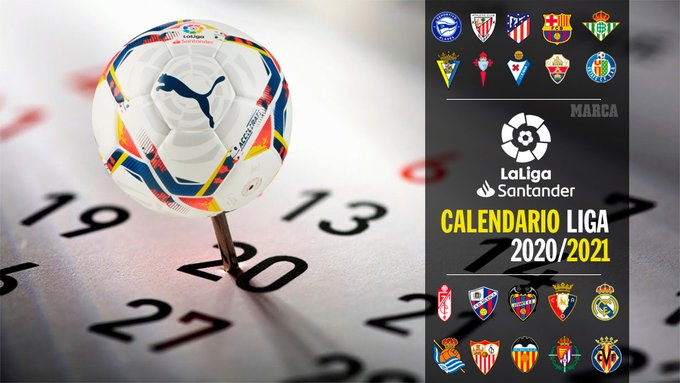 The La Liga fixture list for the 2020-21 Spanish football season has been confirmed less than a fortnight before the competition gets underway.

The league season will get underway on the weekend of 12-13 September with the final round of fixtures to be concluded on 23 May, ahead of the scheduled European Championships next summer.

First round of La Liga fixtures for the 2020/21 campaign confirmed. Starts the weekend 12/13 September. pic.twitter.com/yt0mrcvttV

There are a number of caveats involved though with not every team in Spain’s top-flight beginning that early due to staggered end dates for the 2019/20 season.

Real Madrid and Getafe will start their seasons a week later than the opening weekend while Sevilla, Atlético Madrid and Barcelona will get their campaigns underway on the third matchday, alongside Elche – who were promoted via the Segunda playoffs a week ago.

That means there will be seven fixtures on the opening day of action – Elche’s trip to Barcelona, Atletico Madrid hosting Sevilla and Real Madrid’s clash with Getafe will all be postponed until a later date.

A Valencian derby between Valencia and Levante will be staged, while Cadiz’s first game back in La Liga in 14 years sees them play host to Osasuna, while Segunda champions Huesca start with a tricky trip to Villarreal.

The entire fixture list for La Liga – subject to revisions – for the 2020/21 campaign is available to view via the Spanish FA.

Final round of matches in La Liga for the 2020/21 campaign. pic.twitter.com/92onTOn5VV