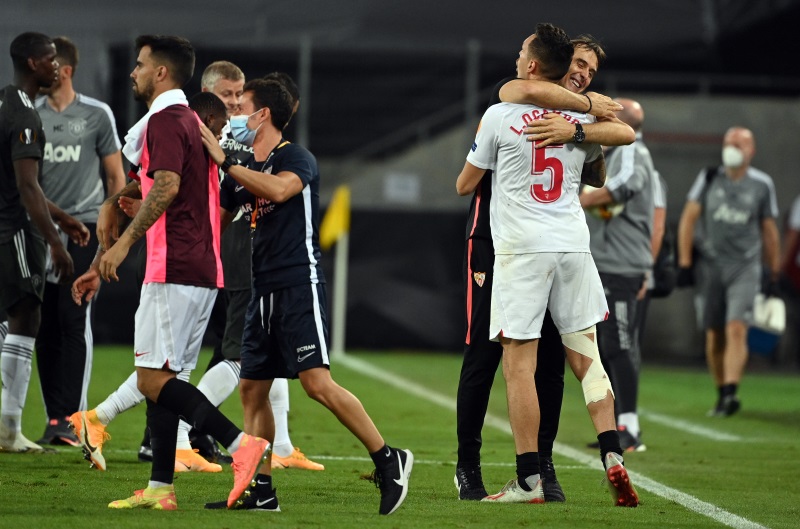 Football in a time of Coronavirus has stripped itself back to the basics. Without supporters in the stadiums and all the regalia that comes with a big matchday, it has been reduced to twenty-two men battling for supremacy. In these one-off legs, especially when omitting artificial crowd noise, the immediacy of competition has been raised even further, emotions heightened, just how good the sport’s elite truly revealed. Sometimes, however, these games can be drab, passionless affairs. Sevilla’s victory over Manchester United in the semi-final of the Europa League was anything but.

From the first whistle it was a battle – two good teams playing quick, high-quality football. Each side deployed a contrasting style; Sevilla were a team to the letter, hard-working, considered, and cohesive, while United leaned heavily on a thrilling frontline coupled with the midfield talent of Bruno Fernandes and Paul Pogba. The former ultimately proved victorious to earn a place in Friday’s final against either Inter or Shakhtar Donetsk, who will play on Monday evening.

It could have been very different. United struck first, earning a penalty in the seventh minute when Diego Carlos caught Marcus Rashford with a follow-through in the area. Fernandes stood up to take it and made no mistake, coolly converting his 19 penalty in a row in stunning fashion – the Portuguese hopped before striking, and even though the Sevilla goalkeeper Bono guessed the right side, he had no chance of stopping it.

Sevilla equalised in the 25th minute. Youssef En-Nesyri, who put in a battling, hard-running performance, carried the ball out the left side before playing in Sergio Reguilón, who had broken from deep. The left-back collected the pass and squared it for Suso, who finished well at the back post. The goal marked a good spell for Sevilla, as they recovered from going a goal down and began to produce slick passages of play. United, however, were ever-threatening – Anthony Martial’s whipped effort flew just over the bar, while Rashford’s powerful free-kick was well-saved by Bono.

As the second half began, United turned up the heat. Fernandes was running wild in the number ten position, finding space in the Sevilla midfield. He played an excellent through ball to find Mason Greenwood, which the teenager controlled well before drawing another good stop from Bono. Soon after, the Morroccan goalkeeper made a sequence of important saves that can well be considered the pivotal moment in the tie, keeping out further dangerous opportunities from Fernandes and Martial.

Sevilla weathered the storm, however, and got their noses in front in the 78th minute. Luuk de Jong hadn’t scored in eleven games when he took to the field as a second-half substitute, but didn’t err when the crucial chance came his way – Jesus Navas, ever present this season, dropped the shoulder to beat his man before centring the ball to find de Jong for a back-post finish.

Their team spirit was underlined in the final moments, when Nemanja Gudelj came on as a late substitute. The midfielder missed Sevilla’s games with Roma and Wolves because he had tested positive for Coronavirus, and only arrived in Germany last week, to a touching standing ovation from his delighted teammates. Such closeness are an important tenet to a group of players operating with a seemingly unmatched degree of fire and desire. Few can match Sevilla’s fight – even fewer should bet against them winning a sixth Europa League title on Friday evening.