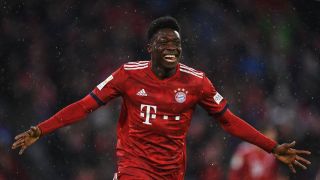 Bayern Munich look to have ended any slim chances of a Barcelona Champions League fightback, with Joshua Kimmich firing them into a 5-2 lead.

A first half brace from German international Thomas Muller, alongside strikes from Ivan Perisic and Serge Gnabry put the Bundesliga giants into a 4-1 half time lead in Lisbon.

Luis Suarez hauled Quqiue Setien’s side back into it after the break, with a composed finish past Manuel Neuer on 57 minutes.

However, any slim chance of a memorable comeback for the Catalans looks to have been ended by Kimmich calm finish just after the hour mark.

The 19-year old has enjoyed a brilliant season in Bavaria, and his outrageous skill bamboozled Nelson Semedo on the wing, before showing great awareness to find Kimmich for an easy finish.

Wow, Alphonso Davies is just so difficult to stop 🔥