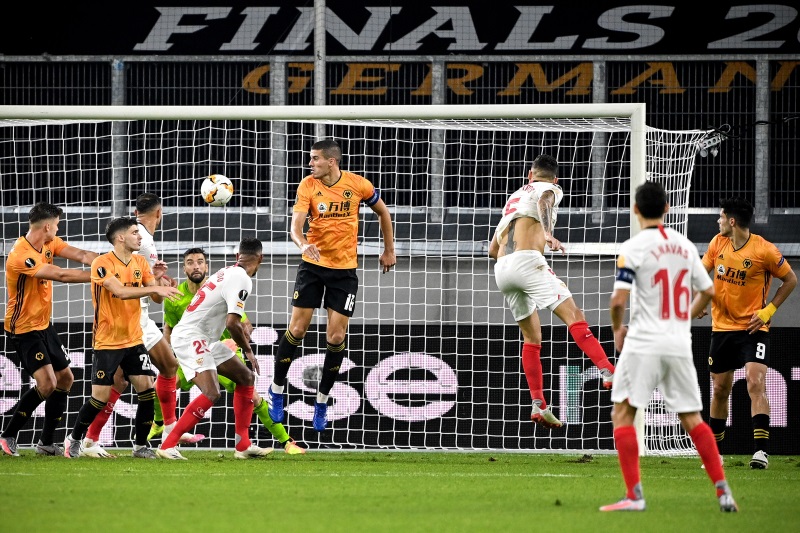 Sevilla’s Argentinian connection came good in the crucial moment on Tuesday night in Germany, with Éver Banega assisting his compatriot Lucas Ocampos to earn their side safe passage to the Europa League semi-final against Manchester United at the expense of Wolverhampton Wanderers. It was a goal worthy of winning any game – Banega collected a short corner in the tie’s dying minutes before playing a clipped ball to Ocampos, whose glanced header flew past Wolves goalkeeper Rui Patrício and into the back of the net.

It was no less than Sevilla deserved. The Andalusians were in control from the first whistle to the last, dominating three-fourths of the possession (with a passing accuracy of 90%) and registering 17 shots on goal to Wolves’ six. They forced their English opponents to change shape twice – from an initial 3-5-2 to 5-3-2 and finally 5-4-1. Wolves were always dangerous on the break, with lethal pace in Adama Traoré and a ruthless finisher in Raúl Jiménez but were unable to impose control on the midfield.

Banega, however, could. The 32-year-old touched the ball 140 times over the 90 minutes, more than three times as much as any Wolves player, providing 118 passes and three key passes. Sevilla’s semi-final rendezvous with United could be his last game for the club, with a transfer arranged to Al-Shabab in Saudi Arabia as soon as the Europa League campaign culminates – on the evidence of showings like tonight, his creativity and guile will be sorely missed by Sevillistas next season.

The game could have pursued a very different path, however. Wolves earned a penalty just ten minutes in, when Diego Carlos brought down Traoré after the Spaniard had broken from deep with frightening speed. Jiménez was charged with taking it but could not convert – Yassine Bounou instead proved the hero, guessing correctly and saving well. It was quite the feat given that the Mexican forward had scored eight of his previous ten penalties.

After this initial wobble, Sevilla recovered and began to assert themselves on the game. Jules Koundé was magnificent at centre-back – still just 21, the Frenchman showed a maturity belying his tender years with a composed performance that showed exactly why he’s reportedly attracting so much attention from Europe’s elite. This confidence was matched by Banega in midfield and the ever-threatening Ocampos, deployed in a fluid role in the forward positions alongside an impressive Suso and a lively Youssef En-Nesyri.

It was the latter, the Morrocan En-Nesyri, who came closest initially when Julen Lopetegui’s side began to turn the screw. He showed great tenacity to win the ball at the edge of the box and evade the challenges of several Wolves defenders to maneuver inside, only for his stabbed effort to be smothered by Patrício. Moments later, Suso squared for Kounde, only for his header to be miscontrolled and fly off-target, before Banega saw his floated free-kick from 20 yards tipped over the bar by Wolves’ alert Portuguese goalkeeper. In truth, it was a game of few concrete chances; but when Sevilla’s presented itself in the game’s final moments, they made no mistake. Now, their focus is on Sunday’s clash in Cologne with United and the chance to compete for a sixth Europa League title.