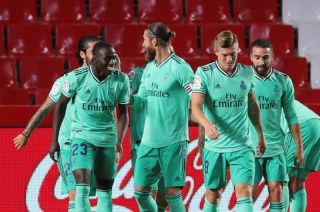 The second legs of the 2019-20 Champions League have seen Real Madrid and Juventus both dramatically dumped out of the competition, ahead of the Lisbon ‘Final 8’ showdown in the coming weeks.

Zinedine Zidane suffered his first Champions League exit as a manager, after being outfoxed by Manchester City boss Pep Guardiola, with a 4-2 aggregate win over Los Blancos.

Juventus were unable to hold off Ligue 1 side Lyon, with Rudi Garcia’s side edging into the quarter finals with a har fought away goals win in Turin.

That result subsequently cost former Juventus boss Maurizio Sarri his job, despite sealing the Serie A title at the end of July, with former Italian international Andrea Pirlo taking over from the former Chelsea coach.

La Liga will be represented in the quarter finals by Diego Simeone’s Atletico Madrid, who take on RB Leipzig, and Barcelona, after Quique Setien’s side powered past Napoli to reach a 13th consecutive Champions League quarter final.

The Catalan giants will now face tournament favourites Bayern Munich, following a domestic double win for Hans-Dieter Flick’s side, with the winners set to do battle with the winners of City v Lyon.

If Simeone’s side can get past Leipzig and into their first Champions League semi-final since 2017, they will play either Paris Saint-Germain or Atalanta.

However, the exits of two domestic champions, makes predicting how the final stages will go difficult.

Predicting the victors in the business end of a competition is never easy, and American sports fans will know how difficult pronosticos MLB can be.

The absence of Real Madrid in the quarter finals may appear strange, due to their dominance of the competition during Zidane’s first spell in charge in the Spanish capital, but this is the second season in a row they have missed out on a last eight spot.

Barcelona and Bayern Munich are the most successful sides in European Cup/Champions League finals still in this year’s competition, with five wins apiece.

The other six sides still in the competition are novices in terms of winning the competition, with just three final appearances, all for Atletico, between them.

Guardiola’s side have only gone as far as the semis, with Lyon matching them via their 2010 last four appearance.

The quarter finals are uncharted territory for both Leipzig and Atalanta, while PSG have flatter to deceive in recent years, with Thomas Tuchel’s side falling at the quarter final stage in four of the last seven seasons.