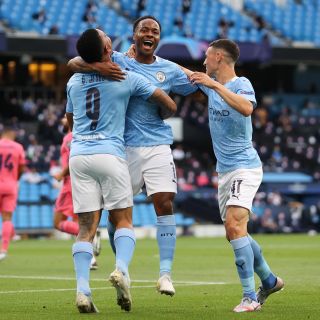 Manchester City’s Raheem Sterling has slotted Pep Guardiola’s side into a 1-0 lead in their Champions League last 16 second leg clash against Real Madrid.

The hosts were leading 2-1 on aggregate ahead of kick off, following their comeback win in Madrid back in February.

Zinedine Zidane’s side chances of fighting back into the tie have suffered a nightmare start however, as England international Sterling benefited from an error by Raphael Varane.

The French centre back was caught in possession inside his own box by Gabriel Jesus, and with the Real Madrid defence unable to react in time, he squared for to Sterling to tap home.

The Real Madrid defender has his pocket picked by Gabriel Jesus and Raheem Sterling is on hand to apply the finish!#Club2020 pic.twitter.com/BykvhWEain

A dream start for @ManCityUS!

The overall picture remains the same for Zidane’s side in terms of the aggregate score, with Los Blancos still needing to score two goals to keep themselves in the contest.

Zidane’s side have reached eight of the last nine Champions League quarter finals, including four competition wins under Zidane, since 2014.