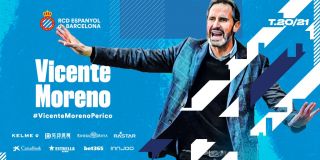 Espanyol have moved quickly to appoint a new manager, with former Real Mallorca boss Vicente Moreno taking over at the RCDE Stadium.

Espanyol and Real Mallorca were both relegated to the Segunda Division at the end of the 2019-20 campaign, alongside Leganes.

The Catalan side opted to make a fourth managerial change of the season, with fives game to go, sacking Abelardo Fernandez and bringing in sporting director Francisco Rufete as caretaker boss.

Moreno played a key role in the recent history of Real Mallorca, securing two promotions inside three years, but he was released from his contract in July, amid interest from Espanyol.

The move has now been officially confirmed by Espanyol, despite being under contract in the Balearic Islands until 2022, with Real Mallorca beginning their search for the new head coach in the coming weeks.

The La Liga and Segunda Division 2020-21 campaigns are both due to start on September 12.