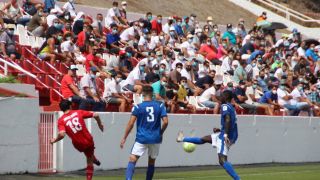 A Spanish football match has been played in front of supporters for the first time since the coronavirus pandemic outbreak in March.

A promotion playoff match between Marino and Tamaraceite was played in front of 300 fans on Saturday in the first game played with supporters in attendance since Real Betis defeated Real Madrid 2-1 over four months ago.

Diario AS outline the details of how supporters were allowed to attend the game on the Canary Island of El Hierro for the game between two-island based teams, who are vying for promotion to Segunda B – Spain’s third tier of regionalised football.

There were strict security and hygiene measures in place for the game which was played on an island which has had just three coronavirus cases and zero deaths since the outbreak of the virus.

El Hierro has little more than 11,000 inhabitants with the stadium holding just one stand with a 700-strong capacity, but only 300 fans were allowed into the ground and had to sit diagonally to adhere to social distancing measures.

All fans in attendance had to sign a document upon entering the ground to declare their state of health while they also had to undergo a temperature check, with anyone whose temperature was above 37.2 degrees was not allowed in the ground.

Everyone in the stands had to ensure they wore facial masks throughout the game, including radio commentators.

The Roman Stadium in Mérida will also have minimal number of fans in attendance for a playoff game on Saturday evening.