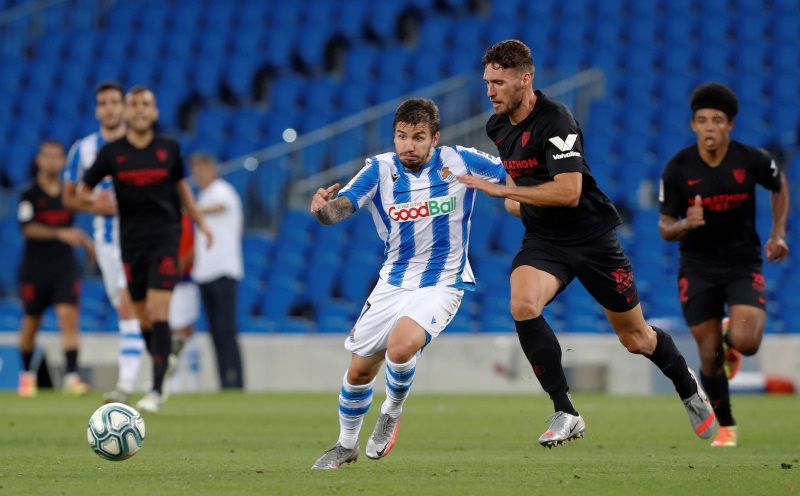 Neither Real Sociedad nor Sevilla could break the deadlock on Thursday evening at Anoeta in what was evenly-matched end-of-season fare. La Real went into the game hoping to retain their spot in the Europa League places, while Sevilla, already guaranteed Champions League football next season, travelled to the Basque Country intent on keeping pace with Atletico Madrid in the race for third place.

The game began slowly, without a great deal of incident. The best opportunities on either side in the early stages didn’t even result in clear attempts on goal but were snuffed out before a trigger was pulled by proactive goalkeeping from the home side’s Miguel Ángel Moyá and Sevilla’s Yassine Bounou. Sevilla began without key players Diego Carlos, Éver Banega and Lucas Ocampos, and it showed. Their build up play was stunted, and they collectively lacked the confidence we have been so used to seeing from them this season. Sociedad, playing with a back five marshalled by the central trio of Diego Llorente, Robin Le Normand and Igor Zubeldia, proved resolute in earning their first clean sheet since February 28th.

Sevilla’s first real chance came five minutes from half-time. Jesús Navas, indefatigable despite his 34 years, bombed forward on the right before cutting a smart ball back to En-Nesyri, whose stabbed effort was dealt with well by Moyá. Sociedad responded with a chance of their own, Mikel Merino latching on to a poor defensive clearance before testing Bounou with a well-struck half-volley from just outside the box. Shortly after the second half restarted, Sevilla threatened again. This time Suso stole a loose ball before shifting to the right and sending a driven effort across the far post and just wide.

On the hour mark, Sociedad had the best chance of the evening. Martín Zubimendi broke through the middle before switching it to Portu on the far right, with the Spanish winger’s effort rattling the crossbar. Ten minutes later, they came close again. Substitute Alexander Isak played a smart one-two to create space for himself before threading through an incisive pass to play in Willian José, but his insolent dink was closed down by a decisive Bounou. José threatened again soon after, only to be blocked by Sevilla defender Jules Koundé, while for the away side substitute Ocampos saw a golden opportunity to steal the points late on pushed wide by Moyá.

Sevilla, not at full strength, looked like a team that has reached their objective already this season, while Sociedad, despite enjoying the better of the chances, just couldn’t find the rhythm that lifted them into the upper echelons of the table, something they’ve been struggling to reconcile since La Liga returned in June. They travel to the capital to take on Atlético Madrid on the final day of the season, while Sevilla will welcome Valencia to the Sánchez Pizjuán.