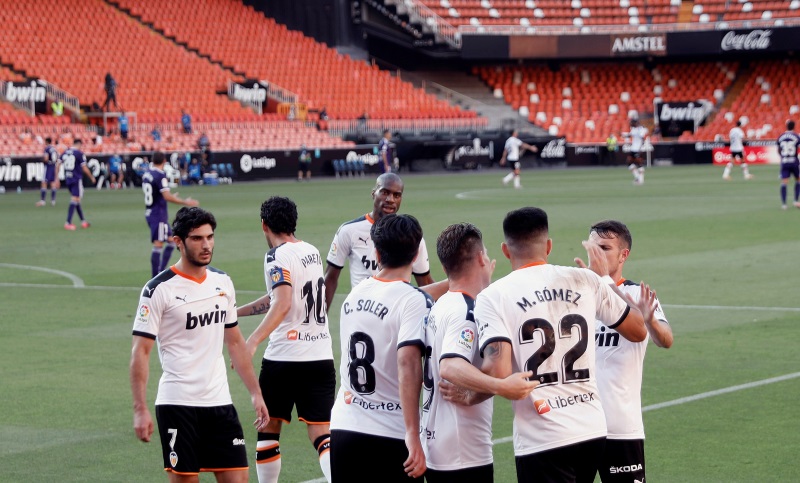 Valencia mass clearout of 12 first-team players to include Rodrigo, Gameiro and Cillessen

Valencia are planning a mass clearout of their squad this summer with strikers Rodrigo Moreno and Kevin Gameiro among those to be offered moves elsewhere.

That is according to a report in Cadena Cope, who say that the strikers are not in Valencia’s plans while a host of other notable players including goalkeeper Jasper Cillessen, defenders Eliaquim Mangala and Mouctar Diakhaby.

A report in Goal Espana earlier on Sunday claimed Los Che have told central midfield trio Dani Parejo, Geoffrey Kongodbia and Francis Coquelin they can leave the club this summer – with the fresh report verifying that those three players would be among those allowed to leave.

Forward Ruben Sobrino and full-back Thierry Correia have also been told they have no futures at the Mestalla, while they are also prepared to listen to offers for winger Goncalo Guedes, whom they believes can generate a profit.

Additionally, Jaume Costa and Alessandro Florenzi – on loan from Villarreal and Roma – will rejoin their parent clubs at the end of the season.

Jose Luis Gaya is set to be confirmed as the new club captain, with Gabriel Paulista, Carlos Soler and Jaume Doménech all given prominent roles.

Maxi Gómez, Cristiano Piccini, Kangin Lee, Daniel Wass and Denis Cheryshev will also be retained, while the club are still waiting to hear of offers for in-demand winger Ferran Torres, while promising defender Hugo Guillamon is yet to renew his contract which expires next month.

The report in Goal Espana claimed the representatives of all three midfielders, including that of captain Parejo, were told to find their clients new clubs this summer as they were no longer in the plans at the Mestalla.

The story in itself is hugely surprising and it is made even more so by the fact that the news was delivered in the build-up to the team’s clash against relegation-threatened Leganes on Sunday, which Los Che went on to lose 1-0 to 10 men.

Parejo, 31, joined Valencia from Getafe in 2011 in a €6m deal and he has amassed 382 appearances for the club, netting 64 goals in that timeframe and becoming renowned as a set-piece expert.

Kondogbia arrived at the club from Inter in 2017 while Coquelin joined Arsenal the following year.

It follows a chaotic period at the Mestalla, with boss Albert Celades sacked last month and the club seemingly in disarray.

Owner Peter Lim is particularly unpopular among the club’s fans with his daughter telling Valencia fans last month that her family could do whatever they wanted with the club.