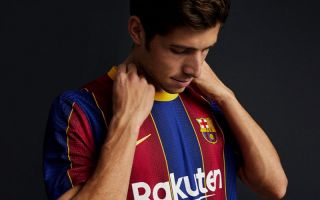 Barcelona have unveiled their new home kit for the 2020/21 season which is inspired by the club’s design from the 1920s.

The vertical stripes are back on the Blaugrana kits and alongside the famed blue and red/maroon colours of their club, there is also gold on the collar, sleeves and to separate the two primary colours.

The Senyera – the flag of Catalonia, the region of Spain from which Barcelona hail from – is also on the back of the new shirt.

The club are advertising the new kit under the term ‘Only for Culers’ which is a nod to the term ‘Culers’ from which the Catalan club’s fans have become known as.

The term gained prominence in the early part of the 20th century when fans sat along the top of stands, meaning that passers by on the streets surrounding the stadiums could only see a row of people’s bums (translating as ‘culs’ in Catalan).

The 1920s was the era when Barcelona drastically grew as a club, winning the 1928 cup final (now known as the Copa del Rey) against Real Sociedad and winning the inaugural Primera league title in 1929.