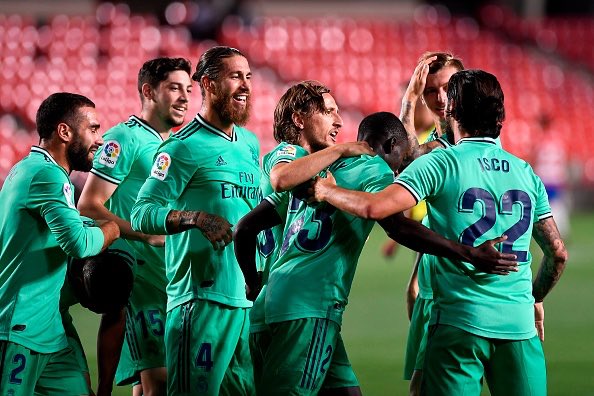 Real Madrid have moved another step closer to securing a first La Liga title since 2017, with a vital 2-1 win away at Granada.

Zinedine Zidane’s side need two points from their remaining two games of the 2019-20 season to seal the title, and Los Blancos could secure it with a win at home to Villarreal later this week.

Victory against Diego Martinez’s side makes it nine successive league wins for Zidane, following the restart of the 2019-20 campaign back in June.

First half goals from Ferland Mendy and Karim Benzema did the damage for visitors, in a dominant first half display in Andalucia.

However, Real Madrid were unable to maintain their level after the break, as the home side looked set to stage a dramatic comeback.

Darwin Machis slotted home on 50 minutes to give Martinez’s side a fighting chance, but a determined Real Madrid had enough to hold on, with Sergio Ramos and Thibaut Courtois both denying Granada in the closing stages.