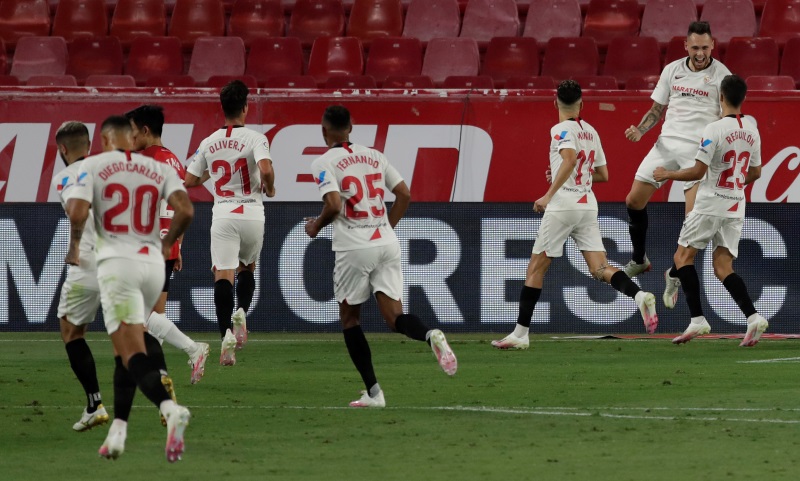 Sevilla proved just too strong for Mallorca on Sunday evening at the Sánchez-Pizjuán. Lucas Ocampos gave the hosts a one-goal lead shortly before half-time, with Youssef En-Nesyri consolidating the victory in the final moments. Coupled with Villarreal’s loss against Real Sociedad on Monday, it ensured Los Rojiblancos are back in the Champions League after a two-season absence.

This is rich reward for Julen Lopetegui, who joined Sevilla last summer intent on rebuilding his reputation after his well-documented dismissal by Spain and his short-lived dalliance with Real Madrid. In securing a return to Europe’s premier club competition he has fulfilled his remit, something you have to do to survive in Seville. This is the hotblooded city of flamenco and bullfighting, a place where style counts as much as substance.

For Mallorca, the defeat meant that they failed in their bid to make up the three-point gap to Alavés in 17th place. With just two games to go, survival is a tall order for the Balearic club – they fought admirably to take the game to their hosts, led by the much vaunted on-loan starlet Takefusa Kubo, but were ultimately overpowered by a Sevilla side playing with a muscular confidence in a stadium in which they haven’t tasted defeat since December of 2019.

Sevilla dominated the opening exchanges without managing to carve a clear-cut opportunity, their first chance coming on the half hour mark. Ocampos waited a step before playing a considered ball through to Jesús Navas, who had broken down the right side. Navas then squared the ball for Fernando, but the Brazilian’s effort was well saved by Manolo Reina. Moments later, Mallorca embarked on a rare foray into Sevilla’s third, only for Éver Banega, tracking back, to make a pivotal intervention to prevent Ante Budimir from getting a shot off.

Five minutes before the half-time break, Sevilla loanee Alejandro Pozo handled the ball in the box and conceded a penalty in favour of his parent club. Ocampos, one of the most in-form players in La Liga since the restart, stepped up to take it, coolly rolling into the bottom left corner of the net and sending Reina the wrong way. He looked the other way when striking the ball in the style of Ronaldinho and wagged his finger at the opposing goalkeeper as he wheeled away in celebration for the audacity of trying to put him off in the buildup. A sequence of play of a man in supreme confidence and in the form of his life.

Five minutes after the second half got underway, Mallorca came within a fingertip of getting back on level terms. A short corner fell to Fran Gámez, who played a looping ball into the box that was met in the air by Cucho Hernández and tipped over the bar by an outstretched Yassine Bounou. Sevilla then almost doubled their lead in the 70th minute through Banega, whose driven shot was pushed over the bar by Reina. The Argentine playmaker was in typically fine form in one of his final appearances at the Sánchez-Pizjuán before he joins Al-Shabab in Saudi Arabia at season’s end.

Sevilla wrapped up the three points in the 84th minute. Bounou launched a high ball that landed, unencumbered, in the path of substitute En-Nesyri, who gratefully lifted his effort over an oncoming Reina and into an empty net.

Sevilla are back into the Champions League with Lopetegui meeting the target with two matches remaining, quite an achievement.