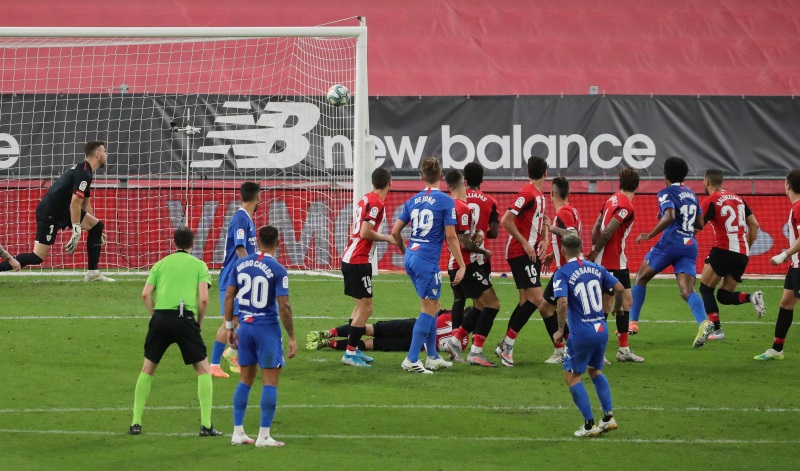 Dressed in blue and white, Sevilla drew upon their Argentinian spirit on Thursday evening at San Mamés. Losing 1-0 at half time to Athletic Club Bilbao, they rallied and, through their veteran playmaker Éver Banega, managed to secure three points that could prove absolutely crucial in their bid for Champions League football this season.

The result meant that Sevilla moved level on points with Atlético Madrid in third and maintained a six-point cushion from Villarreal in fifth, putting them in pole position with just three games remaining. For Athletic, it was a disappointing evening given that victory would have seen them overtake Basque rivals Real Sociedad and put them right in the mix for Europa League football.

Banega was the difference, scoring the goal that drew Sevilla level and creating the one that put them in the lead. He will join Saudi Arabian side Al-Shabab come the season’s end and will prove to be a real loss to Spanish football – from off-pitch hijinks to moments of genuine genius, the magician of Nervión has never been dull.

The game started quickly, with both sides operating with aggression and confidence. Athletic pressed high as Sevilla looked to build from the back, occasionally arrowing driven balls out each flank to progress their play. Both sides threatened in the early stages but failed to trouble either goalkeeper until Athletic took the lead on the half-hour mark. A slick build-up led to the ball being switched out left before being pulled back to Mikel Vesga just outside of the box, who found Ander Capa on the right side to finish accurately past Yassine Bounou.

The goal rattled Sevilla – they had been playing well, with Banega’s light feet running the game, the in-form Lucas Ocampos ever-threatening on the left flank, and the perpetually intelligent Jesús Navas breaking forward from right back. For Athletic, Iñaki Williams was troubling the normally solid partnership at centre-back of Jules Koundé and Diego Carlos, helped by Oihan Sancet just behind and the hard-working Iker Munian and Iñigo Córdoba hugging each touchline.

Athletic almost doubled their lead shortly after the restart, when a loose ball from a corner kick fell to Córdoba in the penalty area but the winger was unable to generate enough power behind his acrobatic effort and saw it comfortably held by Bounou. As the half progressed, Sevilla began to up the pace, drawing good saves from Unai Simón through efforts by Suso and Lucas Ocampos. Making use of a strong bench, they began to pen Athletic back to a point where an equaliser seemed inevitable.

It came on 70 minutes. Sevilla earned a free-kick just outside the box which Banega took, casually lifting the ball into the top right corner of the net with a degree of technique his good friend Lionel Messi would have been proud of. Moments later, the diminutive midfielder was decisive again, whipping an inch-perfect cross to meet an eager and willing Munir in the air and give his team a crucial victory that could prove decisive come season’s end.