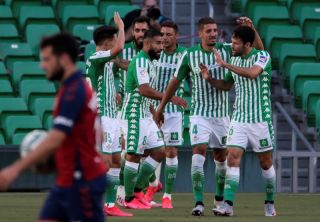 Real Betis picked up just their third victory in their last 15 La Liga games with a comfortable three-goal victory at home to Osasuna.

Guido Rodriguez opened the scoring for the hosts in the fourth minute and they were in total control of proceedings for the remainder of proceedings, with Alfonso Pedraza double their advantage 21 minutes later.

The victory was sealed in the dying moments as Carles Alena, on loan from Barcelona, added a third having replaced Pedraza 16 minutes earlier.

It was the second victory for Betis under interim boss Alexis Trujillo, who is in charge of first-team affairs until a permanent successor is appointed at the end of the season.

Trujillo – who had stepped in following the sacking of Rubi last month – had guided Los Verdiblancos to a 1-0 win at home to Espanyol late last month, but this is their first triumph in the four outings since.

It ended a run of four games unbeaten for the Pamplona-based side, while the result also ensures Betis are mathematically safe from relegation.