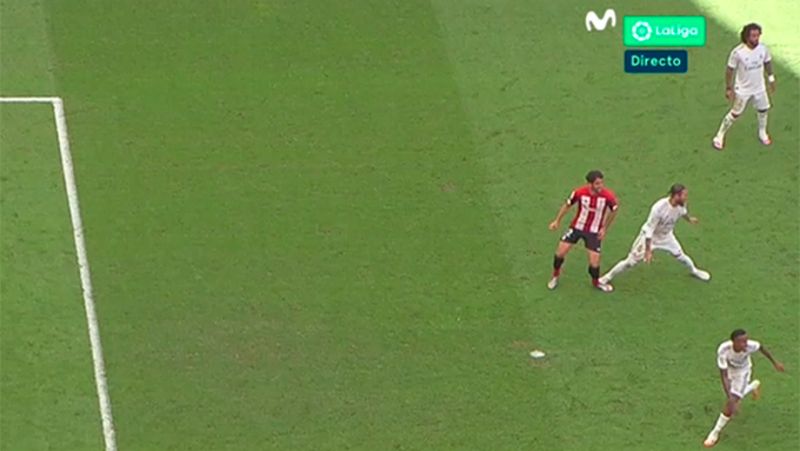 Real Madrid’s win at Athletic Club Bilbao on Sunday was overshadowed by a controversial VAR decision not to award the hosts a penalty.

Sergio Ramos appeared to stand on the ankle of Athletic Club forward Raul Garcia in the penalty area just minutes after the Madrid captain had given his side the lead from the penalty spot.

However, VAR did not intervene to award the hosts a penalty and Diario AS now highlight that this is because the IFAB ruling, originally written in English, has not been accurately translated into Spanish – which the officials were basing their decision on.

The incident occurred off-the-ball and not directly in the action, but the IFAB Rule 12 does not make any reference to the ball being contested – meaning that the foul should have been punished with a penalty for Athletic.

However, the Spanish translation of the law has bizarrely amended the rule to add the phrase ‘contesting the ball with an opponent’ is a requirement before awarding a foul – meaning that under this definition, a penalty should not be awarded.

Therefore, the incorrect Spanish version means a penalty should not have been awarded against Madrid but the correct law means that the foul should have been given against Ramos.

Real Madrid news has recently been dominated by officiating controversies, with the side’s wins over Valencia and Real Sociedad both heavily influenced by several controversial decisions which were awarded via VAR.

Indeed, Madrid are said to be are enraged with comments from senior officials at Barcelona which claimed that they have benefitted from VAR decisions.

According to the front page of Tuesday’s edition of Marca, Madrid believe that the Catalan club’s comments are driven by ‘rage and envy’ at their successes on the pitch in La Liga.

Madrid lead Barcelona by four points at the summit of La Liga with just four rounds of action remaining and are on course to land only their second league title since 2012.