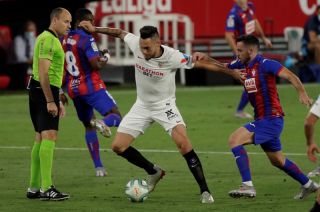 The calm before the storm. That is what it felt like in the final moments in Seville on Monday night as Eibar were pressing for an equaliser. They were playing, as they had done all night, sin miedo, without fear, and were looking to earn a point that could prove all valuable in their fight against relegation. Then, it happened. A high ball found Kike, who attacked his effort with full blood only to see it bounce off the post and spin away from goal. In the process, he clattered Sevilla goalkeeper Tomáš Vaclík, ending his game and potentially his season.

A five-minute wait ensued as Vaclík was stretchered off, with play resuming in the 100th minute. Given that Julen Lopetegui had already made his allotted five substitutions, Lucas Ocampos had to go in goal. The Argentinian had given his team their lead and now he was charged with protecting it. Opposition goalkeeper Marko Dmitrović had come up for the final play and drew a fine save from Ocampos before Jesús Navas cleared the follow up off the line to confirm the victory.

No words are enough to describe this game! 🤯🔥

Fasten your seatbelts and enjoy the highlights from #SevillaFCEibar! 🎢🏎️

The win means the Andalusians have opened up a six-point gap between themselves and Villarreal in fifth while trimming the distance to Atlético Madrid in third to just two points with only four games remaining. They celebrated like they meant it at full time – they know Champions League football is within reach. Eibar fought with typical heart and were unlucky to fall just short. They have their own six-point cushion from the relegation zone and will head into crucial upcoming games with Leganés and Espanyol determined not to let it slip.

The visitors started brightly. Sevilla were without the suspended Jules Koundé, so had to break up his partnership with Diego Carlos at the centre of defence and replace him with Sergi Gómez. He proved an able deputy, but there were shaky moments early on that left the home defence slightly rattled. Nevertheless, Sevilla played with characteristic confidence – progressing through the lines with zip and skill, beating a high press and fashioning no few chances, the best of which came shortly before half time.

Éver Banega whipped in a perfect corner to find Fernado in the box, but the Brazilian’s header was expertly tipped wide by Dmitrović. Moments later, Ocampos turned smartly and found himself clean through on goal, only to see his insolent dink fall just wide of target. Eibar had their own chance soon after the restart. Sebastián Cristóforo found Pape Diop with a well-placed corner kick, but the Senegalese’s glanced header spun just wide – Esteban Burgos was mere inches away from smuggling it over the line at the back post.

Sevilla’s goal came in the 55th minute. Jesús Navas, in typically fine form, turned inside on the right wing to play a clipped pass, with his weaker foot, out the left side for Ocampos. The Argentinian caught the cross first time with the outside of his foot to put the ball into the back of the net for his 13th goal of the season. The goal encouraged Eibar to push on with greater urgency, but until the dramatics in additional time Sevilla held strong. They even came close to doubling their advantage five minutes from the end, when Joan Jordán, on his 26th birthday and playing against his former team, turned intelligently from the right side to tee up Suso, only for Dmitrović to steer his placed finish expertly wide. In the end, however, it was of no importance. Sevilla, and Lucas Ocampos, had done enough.