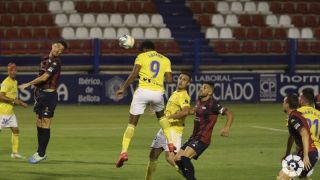 Cadiz are on the verge of a return to La Liga for the first time since 2006 after extending their leading at the top of Spain’s Segunda division to eight points.

The Andalusian side picked up a 1-0 win at Extremadura – who are now on the verge of relegation to Segunda B, Spain’s third tier – to put themselves into a commanding position at the top of the table.

Álvaro Cervera’s side (69 points) are now eight points clear of both Huesca and Real Zaragoza, with Almeria one point further back – although the chasing pack all have a game in hand.

That leaves a situation whereby it is almost certain that Cadiz will be promoted as champions while the race for the second automatic promotion spot looks set to go to the wire.

If Cadiz beat Fuenlabrada this weekend and one of Zaragoza or Huesca do not win in their next games, their promotion will be confirmed.

Cadiz’s title charge has been based on their strong defence – they have conceded just 35 goals in the league this season.

The remaining sides in the playoff positions are Girona and Elche, although a cluster of sides are within just two points of the top six – Fuenlabrada, Rayo Vallecano, Tenerife, Alcorcon and Mirandes.

The 2005/06 campaign, when they finished 19th, has been Cadiz’s only spell in the top-flight of Spanish football since 1993.