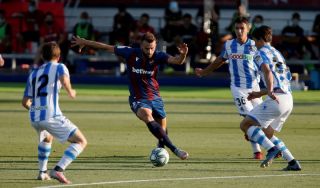 La Liga: Real Sociedad’s Champions League hopes all but over after draw at Levante

Real Sociedad’s slim hopes of a Champions League spot appear to be over after they were held to a draw at Levante.

Alexander Isak gave the visitors the lead in the 12th minute but Jose Luis Morales draw Levante level four minutes later and there were no further goals as the points were shared.

The results mean La Real have won just one of their seven league matches since Spanish football resumed last month, meaning they have dropped three places from fourth to seventh in the standings.

Imanol Aguacil’s side are now six points from Sevilla, in fourth, with the Andalusian club hosting Eibar later on Monday evening and as things stand, Real Sociedad will qualify for the Europa League.

This result means Levante have now lost just one of their last eight matches – a 1-0 home defeat to Atletico Madrid – and remain 12th in the standings, meaning they are no mathematically safe from relegation.