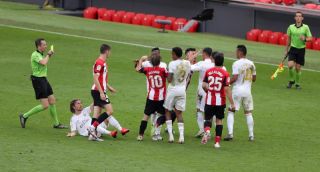 Real Madrid moved seven points clear of Barcelona in the title race in La Liga with a hard-fought win at Athletic Club Bilbao.

For the second match in succession, Sergio Ramos netted a second half penalty to win the game 1-0 for Zinedine Zidane’s side in a match of few clear-cut goalscoring chances.

Barcelona face a tough trip to Villarreal later on Sunday in their game in hand, but Los Blancos require just eight points from their remaining four league matches to clinch the title.

Sergio Ramos converts the penalty after Marcelo was brought down and Madrid finally get the breakthrough ⚪ pic.twitter.com/lL5y0M0CXi

Ramos netted from the penalty spot – his 22nd converted penalty in a row for club and country, and his 10th La Liga goal of the campaign – in the 73rd minute after Marcelo had been felled inside the penalty area.

There was huge controversy moments later as Ramos appeared to tread on the ankle of Athletic’s Raul Garcia in the penalty area, but VAR did not intervene to award a penalty.

Madrid have now win six games from six since the restart of La Liga last month – and now have three successive clean sheets – while Athletic remain eighth in the standings and outside the European qualification spots.

Muniain: “we’ve seen how things have gone in recent weeks….depending which team it is, some penalties are given. Let everyone reach their own conclusions.”