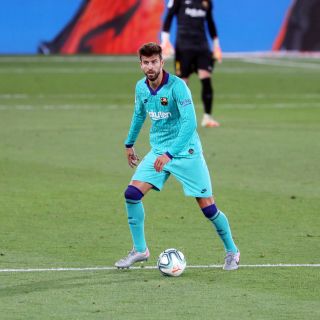 Barcelona defender Gerard Pique has praised his teammates for showing a fighting spirit in their 4-1 La Liga win at Villarreal.

The former Spanish international was key for Quique Setien’s side again, as goals from Luis Suarez, Antoine Griezmann, Ansu Fati and a Pau Torres own goal, sealed all three points at El Madrigal.

The result means Barcelona remain four points behind league leaders Real Madrid, but Pique insisted La Blaugrana will battle on until the final game of the 2019-20 season.

“The three points were important as we continue the fight for La Liga, and that is our hallmark,” as per post match reports from Marca.

“We will try to keep playing like this until the end of the season. We do not like being in this situation, but we will keep fighting.

“Being at this club means fighting until the end.”

🗣 @3gerardpique: ❝For the history of this Club. To represent this crest and these colors, we have to fight to the end.❞ pic.twitter.com/wleiyKCAWB

Three league draws, against Sevilla, Celta Vigo and Atletico Madrid, on their return to action, has seen Setien’s side hand the title advantage to their arch rivals in the capital.

Their chances of overhauling Zinedine Zidane’s side look slim in the coming weeks, with just four games to play in the campaign.

Up next for Barcelona is a midweek home game against Espanyol, with their Catalan neighbours currently bottom of the table.

Setien’s team end the season with trips to Real Valladolid and Alaves, and a Camp Nou visit from Osasuna.