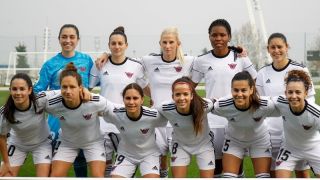 Real Madrid have officially launched their Femenino team after completing the purchase of Madrid-based team Tacon for €300k last year.

Organised top-flight women’s football in Spain has been in place since 1988, with Barcelona and Espanyol among the founding clubs.

There is now an 18-team top-flight with Barcelona and Atletico Madrid proving to be the two most successful clubs – winning eight of the last nine league titles between them, with Athletic Club Bilbao lifting the title in 2016.

Madrid confirmed in a statement released on Wednesday that the club was now official, after club members approved the takeover deal on 15 September 2019 and subsequently ratified by the Spanish FA, with the club to operate under Real Madrid’s name from the start of the 2020/21 season.

Los Blancos club president Florentino Perez has said: “It is now time to build a team that we will all be very proud of.”

Tacon – who had been formed in Madrid in 2014 – earned promotion to the top-flight last season and made several statement signings in expectation of the takeover deal being completed.

Swedish international duo Kosovare Asllani and Sofia Jakobsson were among the arrivals while Brazilian midfielder Thaisa joined from AC Milan.