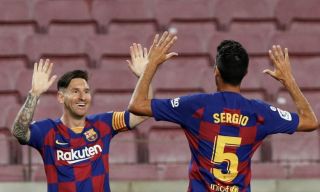 Lionel Messi has netted his 700th career goal, with a brilliant panenka style penalty, to hand Barcelona a 2-1 lead over Atletico Madrid.

The La Blaugrana skipper has been waiting to break another goal scoring milestone, and his deft effort was a fitting way for the Argentina international to make it 700.

A cheeky Panenka penalty to do it 🔥

Quique Setien’s side took an early lead at the Camp Nou, as Diego Costa scuffed Messi’s whipped corner into his own net on 11 minutes.

Diego Simeone’s side rallied immediately, with Yannick Carrasco winning a penalty at the other end, four minutes later.

Costa’s spot kick was saved by Marc Ter Stegen, but referee Alejandro Hernandez Hernandez opted to call for a retake, as the German keeper came off his line too early.

Saul Niguez buried the second spot kick, to send the visitors in level at the break.

Barcelona have looked bright in the opening stages of the second half, with Messi edging them back in front from 12 yards, after Felipe Monteiro fouled Nelson Semedo inside the box.