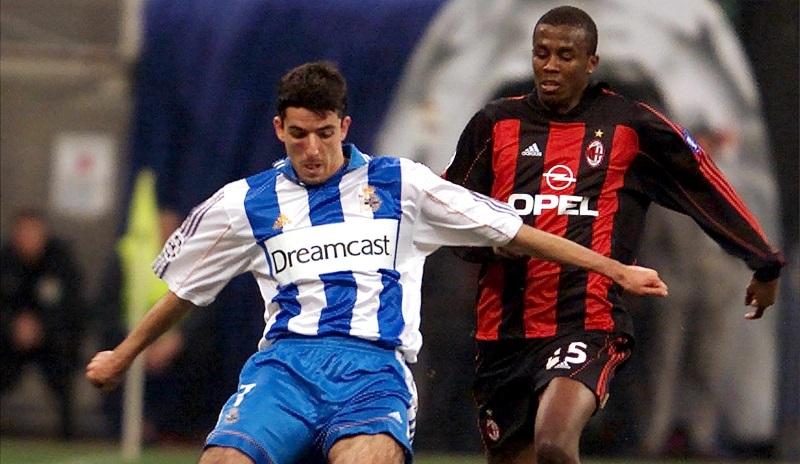 A league champion in two different nations, the top scorer and the proud holder of a fastest goal record. All stellar achievements of former striker Roy Makaay, who enjoyed a remarkable trophy-laden career.

He began his career at Dutch outfit Vitesse Arnhem; in four years with the club between 1993 and 1997, he scored 42 goals in 109 games between 1993 and 1997. His performances earned him a move to Tenerife and despite featuring in a struggling side, netted 21 goals in 72 outings. After the side succumbed to relegation in 1999, he would swaped the Canary Islands for Galicia and a move which would put him and his team firmly on the footballing map.

Deportivo La Coruña paid €8.6m for the striker’s services and it proved to be one of the bargains of the season. He started life at Riazor with a bang – scoring a hat trick on his debut in a 4-1 home win over Alavés. It was a sign of things to come as his 22 goals that season earned Deportivo their first La Liga crown as they kicked off the new millennium in style. It was a fitting victory after the heartbreak of six years earlier when Depor had the chance to win La Liga only to draw 0-0 in their final game and missed a penalty in the last minute from Miroslav Đukić.

The league coronation was the culmination of the hard work at the club. Indeed, Makaay was at the start of the ‘Super Depor’ heady days where they were one of the best and most feared teams on the planet. No opposition team relished going to fortress Riazor where many a rival would return empty-handed.

Makaay continued to be within the goals for the next three seasons and was a member of the team which won the 2002 Copa de Rey, famously beating Real Madrid in their own backyard. Deportivo were very much the party poopers as their crashed the centenary celebrations for Los Blancos.

The flying Dutchman would win three major trophies in his time in La Liga, linking the Copa del Rey and La Liga to the 2002 Spanish Supercopa as Deportivo added to their trophy haul like taking candy in a sweetshop. It was the Galician’s golden era and more success was to come for Makaay as the 2002/03 season would see him crowned as the Pichichi of Spanish footballing scoring a mighty impressive 29 goals in 38 games. In addition, his nine goals in 11 games in the Champions League increased his tally to 39 goals in 54 outings and earned that season’s European Golden Shoe as the top goal scorer in all of Europe.

After four years in La Coruña and 79 goals in 133 appearances, Makaay moved onto pastures new and that would be found in Germany with Bayern Munich paying €20m to acquire him. His success continued in Bavaria where he would rack up another two league titles back to back in 2005 and 2006, as well as the German Cup from the same years and therefore completing the double-double.

Like in Galicia, the Dutchman would spend four years in the Bundesliga and scored 78 goals in 129 games. During his time with Munich, he had a penchant for breaking records. In 2004, he became part of a select few of players to score Champions League hat-tricks at two different clubs when he scored three against Ajax. Curiously, his previous hat-trick was for Deportivo against his future club of Bayern a year before he moved to Germany. Talk about putting yourself in the shop window.

He would also score Bayern’s 3,000th goal in 2006 and a year later, in March 2007, he would achieve the notable feat of becoming the fastest goal scorer in the history of the Champions League. That strike arrived after just 10.12 seconds against Real Madrid as Bayern overcame a first leg defeat to conquer their Spanish rival. The goal was made even more remarkable considering Madrid kicked off and it was a mistake from Roberto Carlos which lead to Makaay breaking through to score. A record which still he holds to this day.

After a glorious time in Germany, Makaay would return home to he Netherlands and sign for Feyenoord. He would play on for three more years where he would lift the Dutch Cup. Fittingly, he ended his career by scoring a hat trick in his last professional match against Heerenveen. For many years after he would be part of the Feyenoord management staff covering a range of roles from scout to Under-21 Coach.

International honours also arrived for the striker who played at two European Championships in 2000, in his home tournament, and in 2004 in Portugal. His record for the Oranje reads six goals in 43 games. He also appeared in the 2008 Olympic team in Beijing as one of the three designated overage players. He would captain the side as the Netherlands made it to the last eight before losing to eventual winners Argentina.

Makaay was known as ‘the goal machine’ for the sheer amount of goals he scored. In addition, the majority of his career he arrived to double figures. He was also known as ‘the phantom’ for his ability to conjure up a goal from nothing.

The striker was a naturally gifted footballer with quick reflexes which was complemented by his sheer pace and power. This gave him the ability to race away time and again to score. Allied to that, Makaay had the knack of being in the right place at the right time. Timing was crucial to the prolific striker who would time his runs to perfection to play off the shoulder of the last defender. He would successfully detach himself from his marker and position himself behind his opposition defence ready to roam into free space and bear down on goal. Makaay made this an art and it was his forte.

It was all due to the striker’s smell of where a goal would happen. The Dutchman was also technically very gifted with both feet. Yet, he scored an abundance of goals not only with his feet, but with his head too due to his ability in aerial situations.

The striker played in three different leagues, but it was La Liga which really propelled him to stardom. In terms of his footballing skills set, Roy Makaay had the lot. He was an eloquent footballer who did his talking on the pitch and was a mercurial talent that indelibly left his mark on the beautiful game.