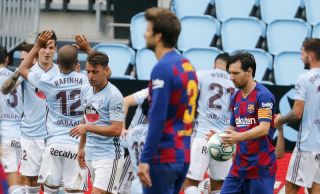 Barcelona lost ground in La Liga’s title race after being held to a 2-2 draw at Celta Vigo in a highly entertaining game.

Luis Suarez twice gave Quique Setien’s side the lead but the spirited home side fought back twice thanks to goals from Fedor Smolov and a free-kick from Iago Aspas.

If you don’t let Messi shoot from a free kick, he’ll just find another way to create a goal! 😍

The result does mean Barcelona temporarily go back to the top of the league as they move one point clear of Real Madrid, who take on basement side Espanyol on Sunday.

But this is a result which represents two points dropped for the Blaugrana and is their sixth successive trip to Vigo without tasting victory.

Suarez headed home an early opener from Lionel Messi’s free-kick but Russian international Smolov levelled things up after the break as he finished off a quick counter-attack from Okay Yokusulu’s pass.

Uruguayan Suarez restored the Catalan side’s lead in the 67th minute with a swivelled finish after Messi won the ball in the penalty area, but Aspas levelled again with three minutes remaining with a well-placed free-kick.

What a blow that could prove to be for Barca’s title hopes 😬 pic.twitter.com/lXfh20KKsn

Substitute Nolito spurned a glorious chance to win the game for Celta late on but he hit straight at Marc-Andre Ter Stegen from close range.

The result keeps Celta 16th in the standings, eight points clear of the drop zone.