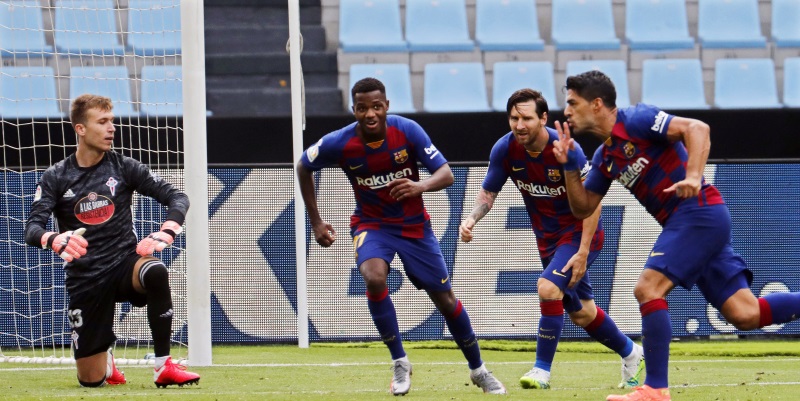 Luis Suarez admits Barcelona are now relying on other teams in the title race in La Liga if they are to retain the league title.

The Uruguayan striker netted twice in Saturday’s clash at Celta Vigo but it was not enough for Quique Setien’s side, who dropped points for the second time in three matches.

If you don’t let Messi shoot from a free kick, he’ll just find another way to create a goal! 😍

Goals from Fedor Smolov and Iago Aspas – with a well-placed free-kick late on – earned a point for Celta, who indeed could and should have won the game late on but Nolito spurned a glorious opportunity.

It was the Blaugrana’s sixth successive trip to Vigo in which they have failed to win and this could prove one of the most costly – if Real Madrid beat basement side Espanyol on Sunday, they go two points clear at the top of the table.

“The sensations are negative after that, we have lost two points in the fight for La Liga”, Suarez said after the game, as cited by ESPN. “We had it in our own hands and now we have to hope that Real Madrid drop points. The sensation is one of frustration because we have given up two points.

“Both teams have tough games to come. This was a complicated place to come, as Villarreal will be next week, and Atletico Madrid at home in midweek. The sensations are that we’ve lost two points and we have to correct things to improve.”

Barcelona host in-form Atletico Madrid on Tuesday before a trip to Villarreal next Sunday.